today's the 2nd of december which means there are not many days at all until christmas, and then only a few more until it's 2012. is that freaking anyone else out??
after some serious thought yesterday, i've decided to play along with car in her advent blogalong. i'm liking this daily blogger caper :D even i i am officially already a day behind... 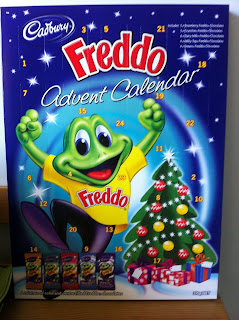 so what did i do on the first of december? i worked, and so did bb, no time for christmas tree decorating on our front. i did however manage to buy advent calendars for us both.
mine was this horrible commercialised freddo one. one year i would loooooove to have an awesome home-made advent calendar like cathie's or vic, but for this year, when i'm feeling beyond time-poor, freddo will do me just fine ;)

i'll be back tomorrow with post number two, and maybe even three but in the mean time, what are your plans for december?
reviewing my november plans, i think i almost got everything done... 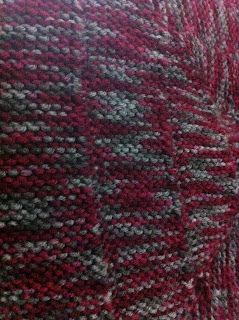 except for the slow knitting project that is, that one is still on the go. in fact, you've even seen it now. and it's actually up for grabs! lyndel made her decision based on my (terrible) photos and has picked the granny square cushion.
pop over here to enter the draw to win :D

now december, i think my main goal is to make it out alive :| christmas is always one of those tricky times, but most of the time it just does my head in!

what are your plans for december?
xo
Posted by nicole at 8:35 PM

way to go Lyndel, love the granny one especially!
Happy December Miss Nic, lovely that you get to enjoy that freddo advent calendar.

Have fun tonite, sorry to be missing it :(