as promised last week, i thought i'd share a little about what i've been up to creatively in recent times...

this month's socks are well and truly off the needles. 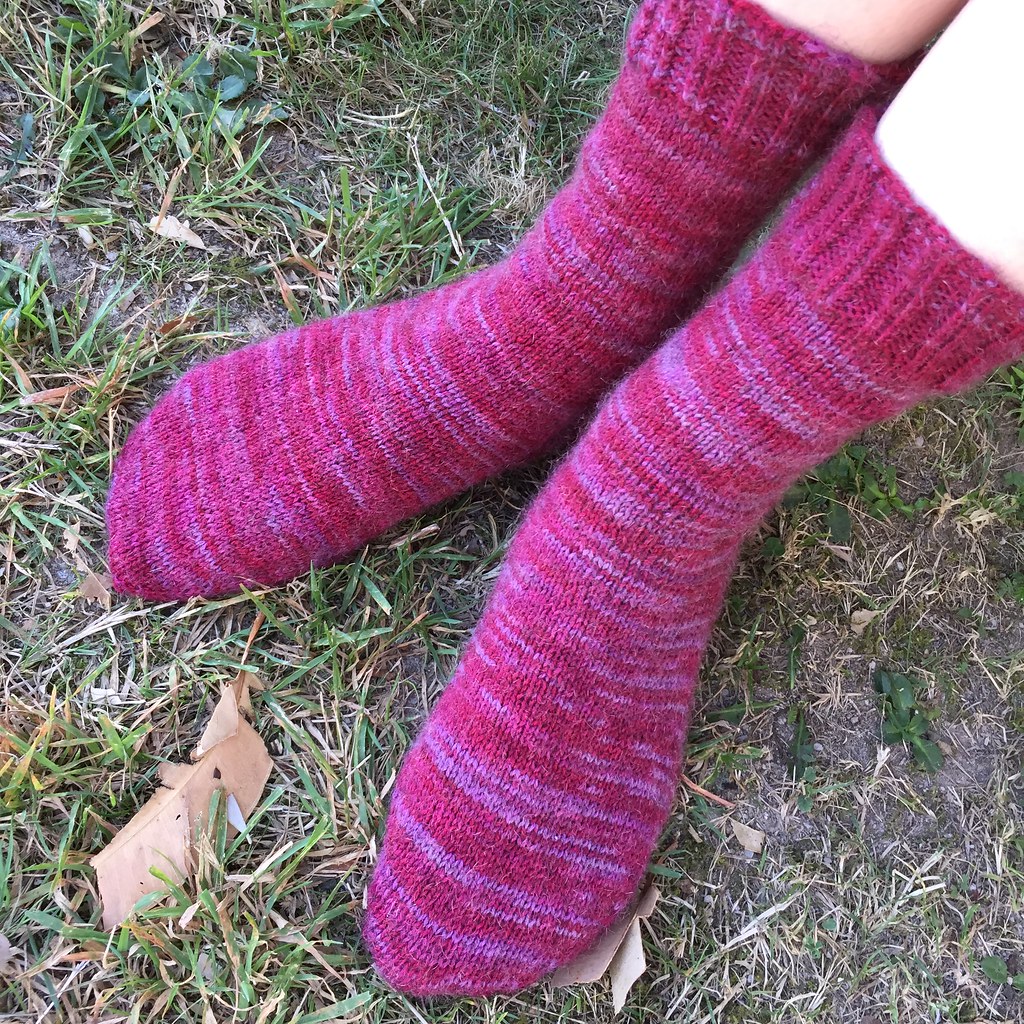 i cast them on on the first day of march, and finished them up in a little over two weeks.
another pair of vanilla socks, but this time, they're for me!

i also played around a little with some dyeing... 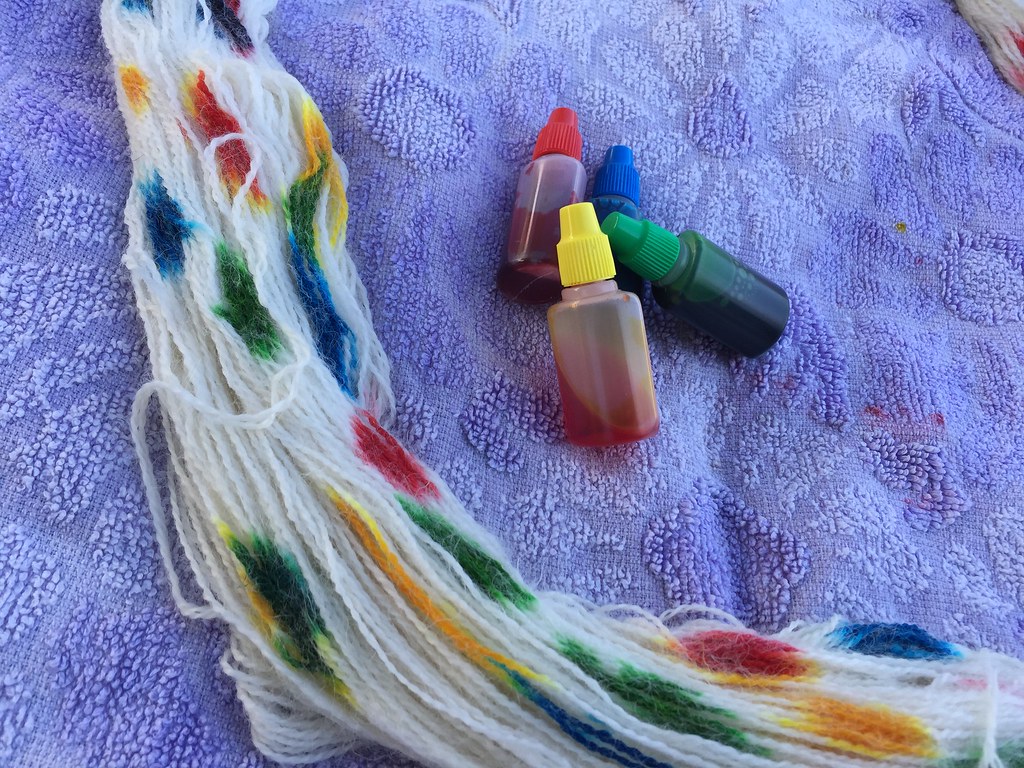 little droppers of food colouring, onto pre-soaked alpaca yarn, allowed to dry and then rinsed, before casting on... 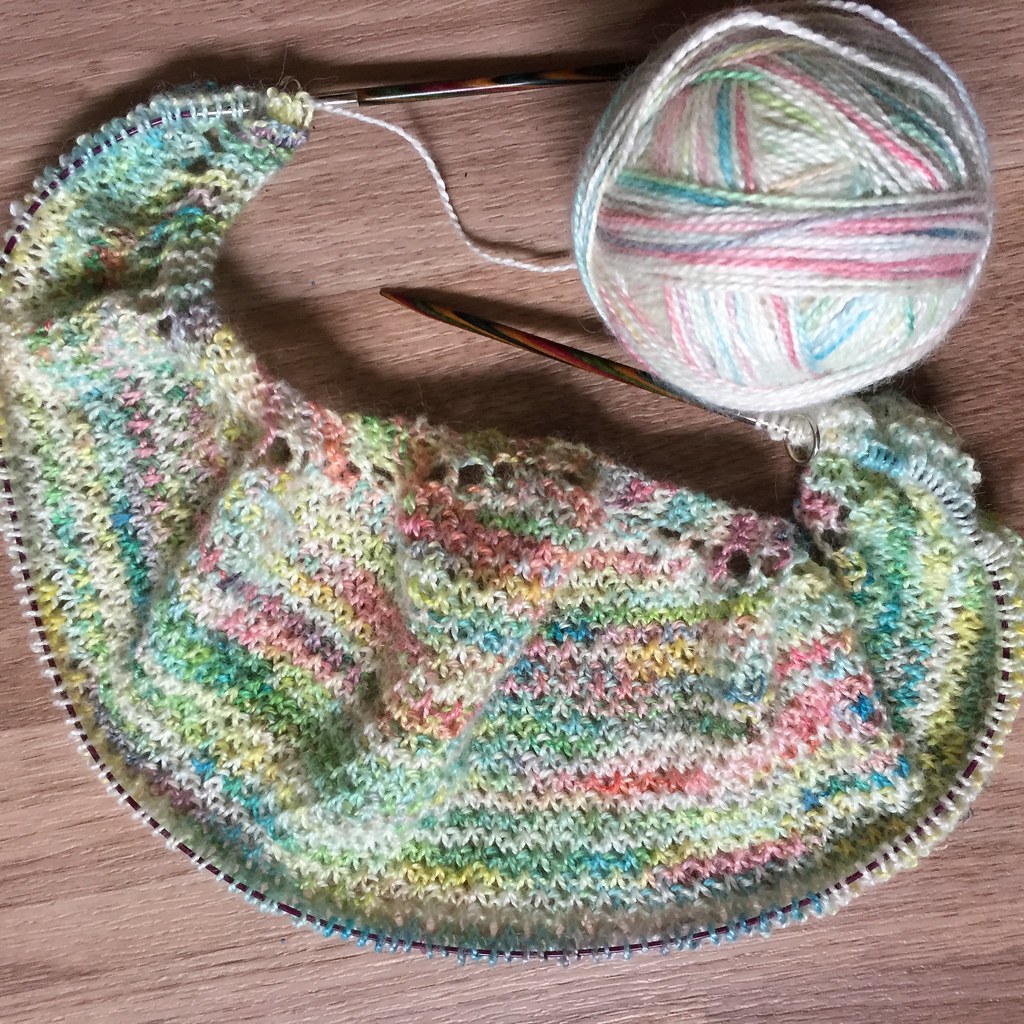 the shawl project i was working on in this post, was ripped and cast on again. i wasn't loving the cream colouring at all, and i'd made a couple of mistakes in the edging when i wasn't concentrating properly...
i truly love it now, and it is finished and blocking as i type. hoping it will be dry tomorrow and the weather cool enough to give it a great first outing!

and because i couldn't possibly have the needles languishing... 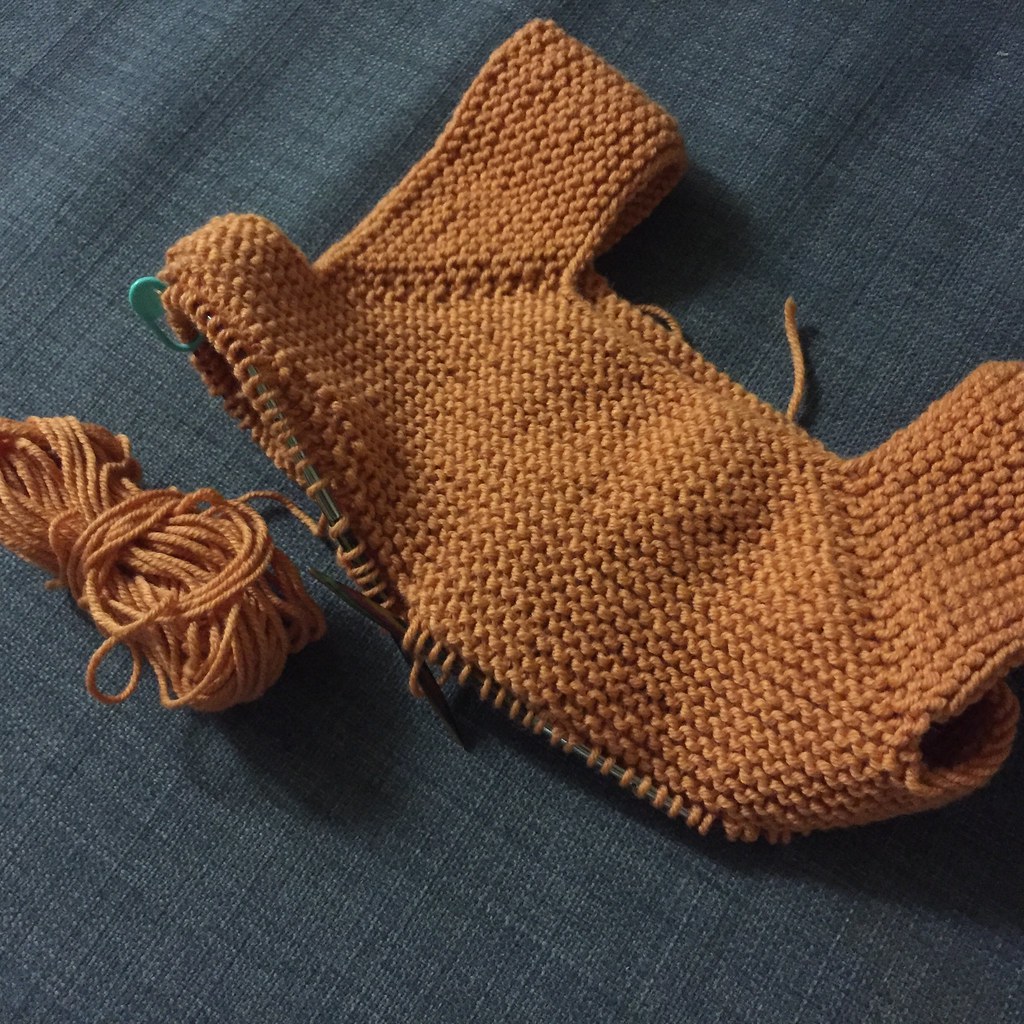 i cast on a milo! it's been a while between knits of this ol' fave and i'm knitting it up in rowan wool cotton, picked up on sale from sunspun a couple of weeks ago now. it's very enjoyable to knit with but i've got quite the decision to make as to which cable pattern to choose!

i'm hoping to get the milo finished up by the end of the month, so i can get started on my april socks! now if only i could choose what they'll be...

do you have a favourite sock pattern? which milo cable pattern would you choose?
Posted by nicole at 7:33 PM No comments: 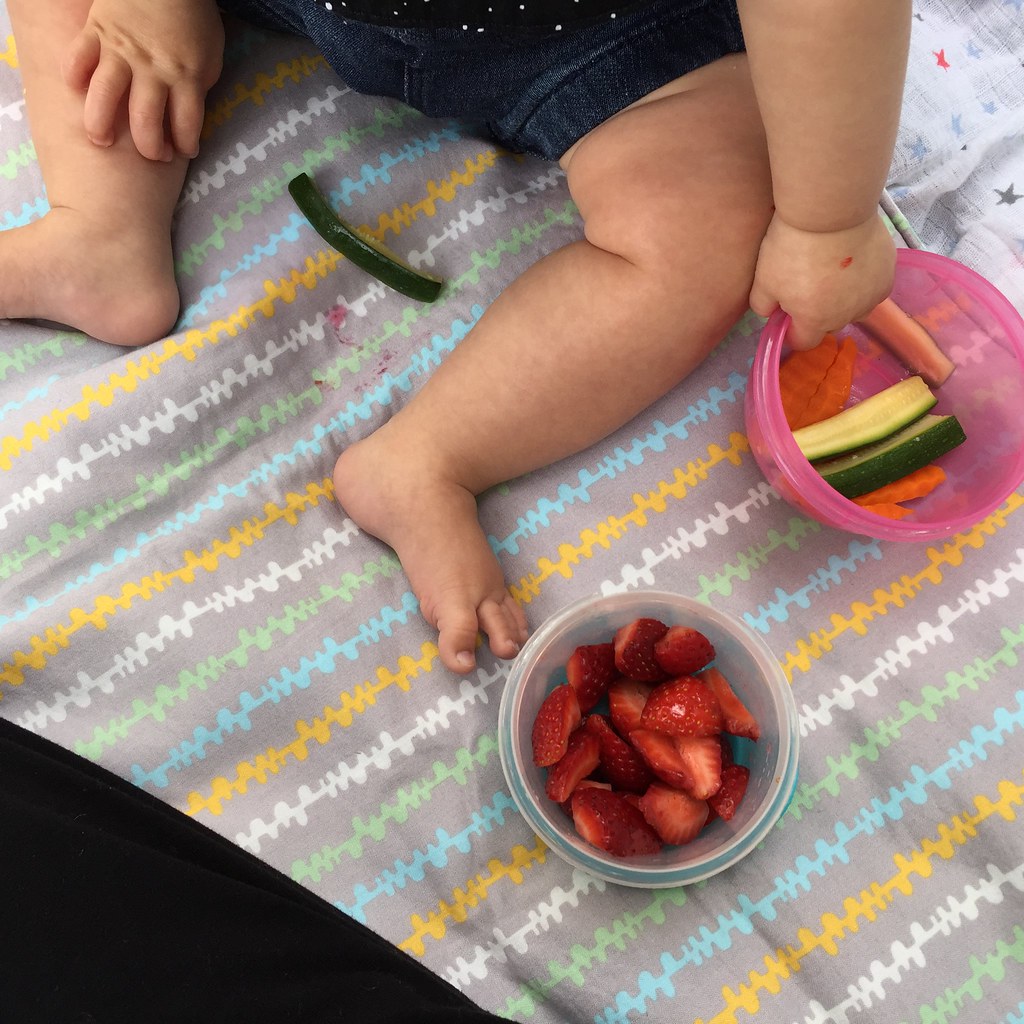 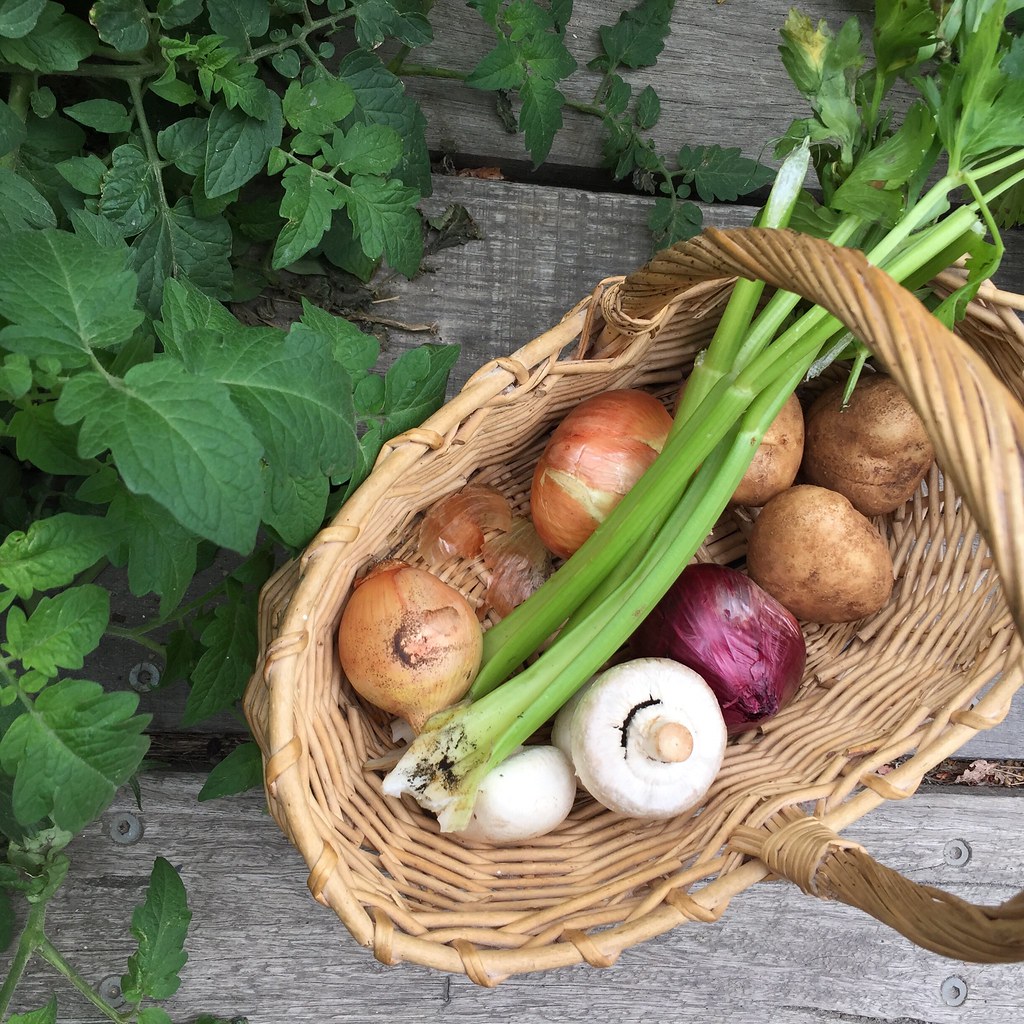 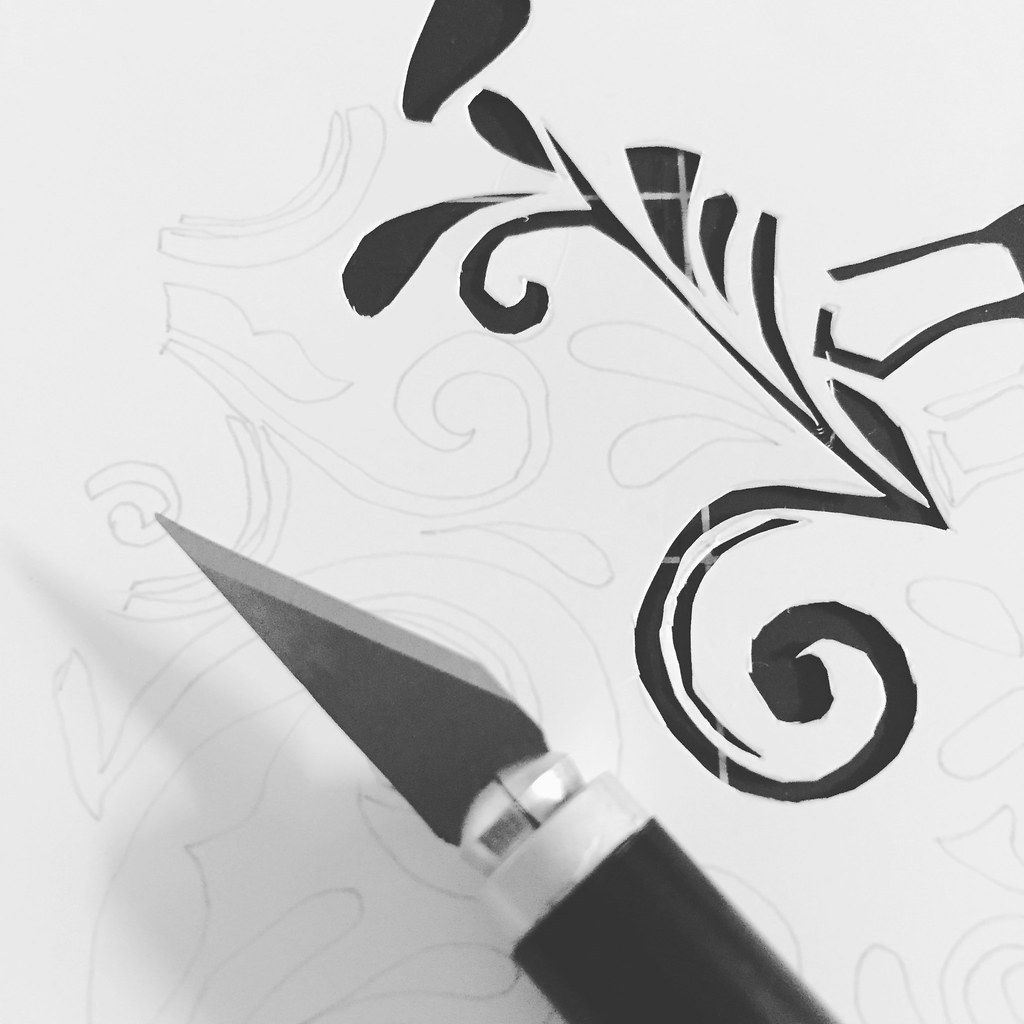 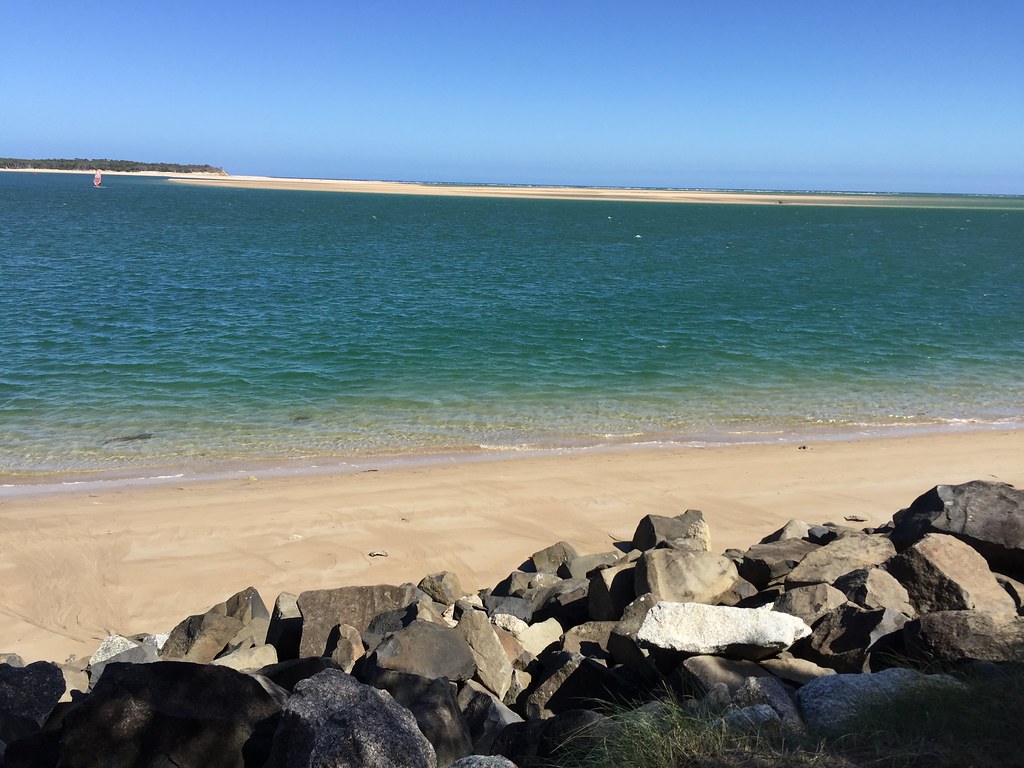 Making : lots of things, in the kitchen and craft-wise too. maybe i'll have to share a bit of creativity next week...

Cooking : quite a bit, there's bread proving on the bench, i've all the makings for a stock, and some thoughts on what to cook to accompany the asian style pork belly we've got planned for dinner are ticking away in my brain.

Drinking : a hot chocolate. treating myself while i sit and type in the relative calm of NOT home.

Reading : actual books! would you believe it? i've just finished 'fight like a girl' which was quite thought provoking and eye opening and stimulating. and i'm just about to start on 'big little lies' after being recommended it by a friend.

Trawling : facebook a bit too often... i think i talked about this last 'taking stock' too, but haven't done a thing about it. deleting the app now!

Wanting : a few more hours sleep. i think this will definitely be my default for the next few years he he.

Looking : at instagram a little less these days, that might change now i've deleted the facebook app though! hopefully not though, it's nice to check in and out without feeling like i need to see every single post which was my default for an embarrassingly long time.

Deciding : on some big picture things at the moment. work-wise, life-wise, it's all up in the air... that would normally terrify me but i'm dealing with the unknown better than i would've thought.

Wishing : people could be a little kinder to one another. it would sure solve a lot of heartache on a global scale don't you think?

Enjoying : not having to stress about money too much at the moment. and letting go of the stress when it crops up...

Waiting : for some images to load. one thing that is not great about country life, internet speed.

Liking : that even though the internet is a bit slow, there's lots to look at while i wait. bees buzzing, birds chirping. the complaints list about this country life is a short one, that's for sure

Wondering : if i know someone local that has a tomato machine i could borrow for a couple of days... i have a hankering to get busy saucing some of the mountains of tomatoes we have around us, but don't think i have the patience to sieve them by hand like i did last year!

Loving : how the skein of wool i dyed last week is knitting up. what a tease, i'll show you more next week he he.

Pondering : what kind of socks to cast on next month... my plan to knit through my sock yarn stash by the end of the year is well on track, cranking out a pair a month!

Listening : to the birds, some sweet cafe tunes, the traffic, people's conversations and low down in the background, the ocean. bliss.

Considering : my plans for the rest of the day. i know what needs doing... but i'll be flexible and roll with what the day brings i think.

Buying : well bought... i broke the yarn buying drought when my fave yarn shop was having a sale. looking forward to picking it up this week! now, no more purchasing! at least until the end of the year. i have my eye on one of these. the perfect antidote to christmas craziness, knitting 15g of sock wool a day! crazy stripy christmas socks for the family he he.

Watching : quite a lot of netflix... we just hooked it up to our playstation, and it's super easy to watch now. we've done 'the crown' and now working our way through 'iron fist' at a rapid pace.

Hoping : for a good week!

Marvelling : at how well one can function having not gotten more than 4 hours sleep at a time for months!

Cringing : at the number of flies currently buzzing around me... they're mighty sticky today!

Needing : to stop eating so many sweets... unlikely to happen in my sleep deprived state though, think it's the only thing keeping me going he he.

Questioning : everything. a lot. there are a few issues lately i've been vacillating wildly on. think it's driving poor bb spare.

Smelling : something delicious being whipped up in the kitchen in this cafe, might need to be off soon to make some lunch!

Wearing : this! who says you can't wear handknits in the warmer months?

Noticing : how distinctly uncomfortable i was in the city last week. we were there for a couple of hours while ben went in to chat to his boss. so many people, so much hustle. just not for me anymore.

Knowing : we're in the right place for us right now. yep. it is known.

Thinking : i've been sitting for too long! my coccyx lets me know these days... boo!

Admiring : parents everywhere. making it work on the daily. it's hard work and i feel like i've got it super easy! feeling lucky!

Getting : excited to catch up with some folks i haven't seen in a while later in the week.

Opening : packets of seeds. time to get some winter seeds into pots and on their way!

Feeling : ready to pop back home and see my fellas. it's good to have a bit of time out, but equally good to chat and play.

Celebrating : easter soon i guess... looking forward to some nice family times for sure! and maybe even some catch ups with friends who are like family. my fingers are crossed!

Pretending : i'm not interested in the new seasons of terrible reality shows that have started recently... for the most part, i've convinced myself... fake it til you make it right?

Embracing : my hair at the moment. it's crazy... curly and frizzy some days, smooth and sleek on others, and the greys, well they seem to be taking over he he. definitely other things to think about at the moment, but i'm hoping to maybe do something drastic soon. we shall see!

what have you been up to lately? care to 'take stock' too? there's a blank list over on pip's post if you want to join in!
Posted by nicole at 12:38 PM No comments:

half a year. that's how long little ag will have been with us tomorrow.

life has never been more different, but i struggle to remember a time without him. 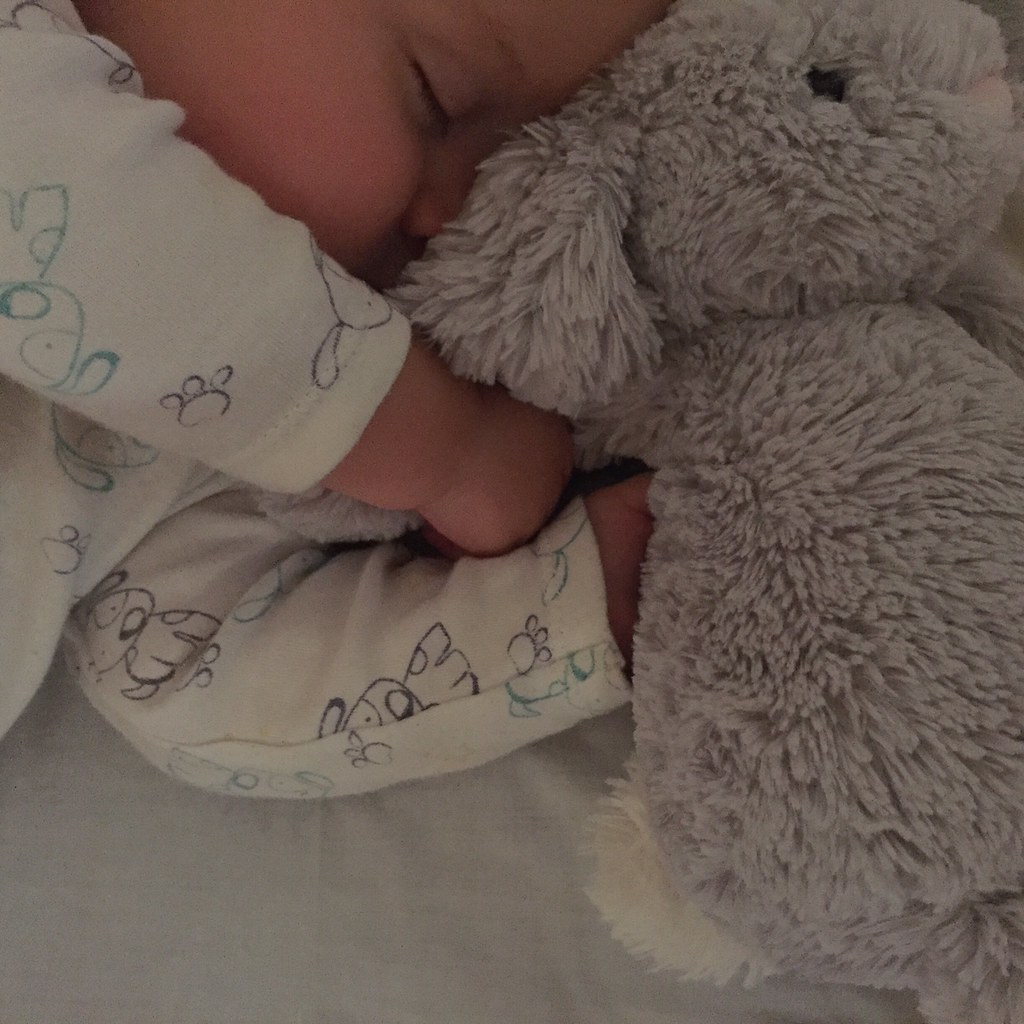 the joyful smiles, crazy giggles and ever moving legs and arms never fail to light up our days and nights and i snap ALL of the photos and try and soak up every little facet of you every day, you'll never be this age again.
Posted by nicole at 4:34 PM 2 comments:

let me show you around.

i feel like, quite a few times, that i've said i'd show you around our little country mouse house...
well i'm finally doing it!

won't you come inside? 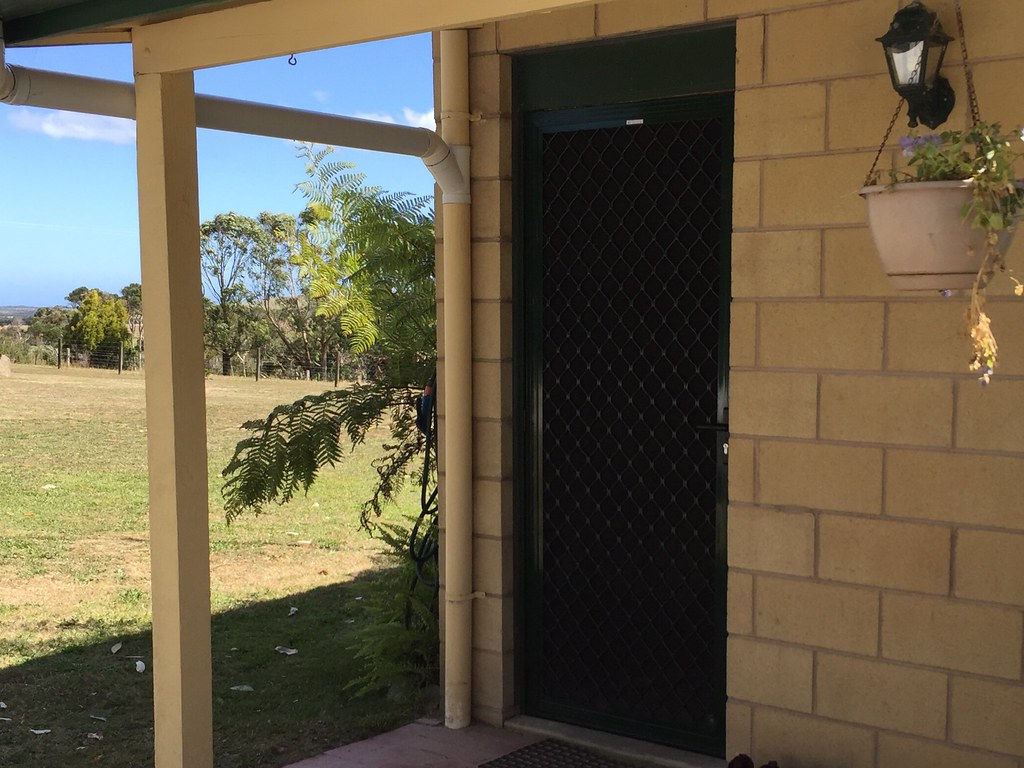 don't mind the cobwebs on that there screen door... no matter how many times i remove them, they're back within a couple of days... never mind.

care for a cup of tea at the dining table?

our house is a little bit of a mish mash of furniture that's for sure... dining table care of my grandmother's house, which was care of HER parent's i think... definitely some provenance on that one. paired with an ikea chair and high chair, and a chair with a fabric seat we picked up from the opshop for $2 (one day i might even reupholster it...)
oh and there's the oddball collection of 'black framed things' too he he!

alongside this little arrangement, is the kitchen sideboard... 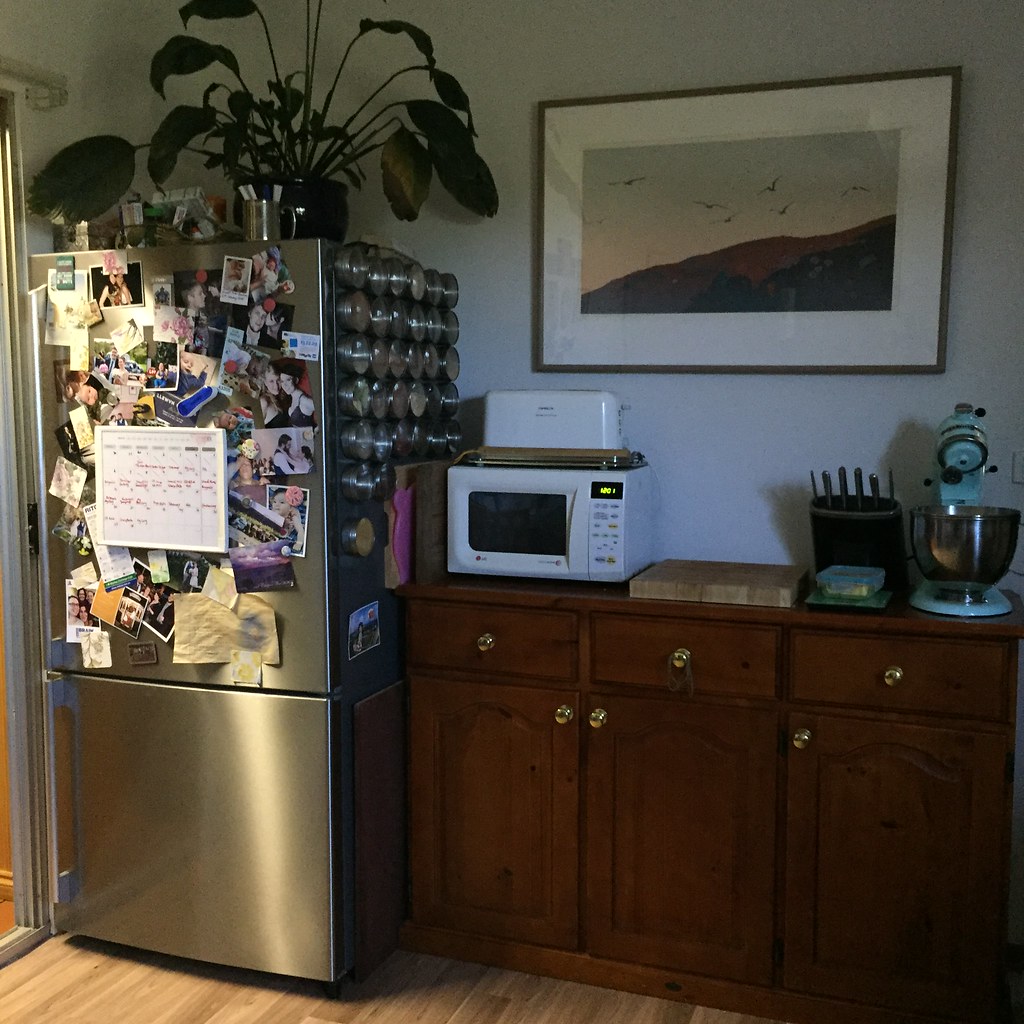 picked up for $100 off gumtree, it's a solid little number and sits perfectly between the fridge and the front door, housing all our crockery, cutlery, glassware, appliances and all the random crap that accumulates in the spare drawer...
the fridge was one of our first grown up purchases when we got proper jobs and our old one died (the day after i had all four wisdom teeth removed, the WORST!) and is covered in photos and postcards and the meal planning whiteboard AND our spice jar collection.
it's a busy little corner of the house!

a quick peak into the baby's room... 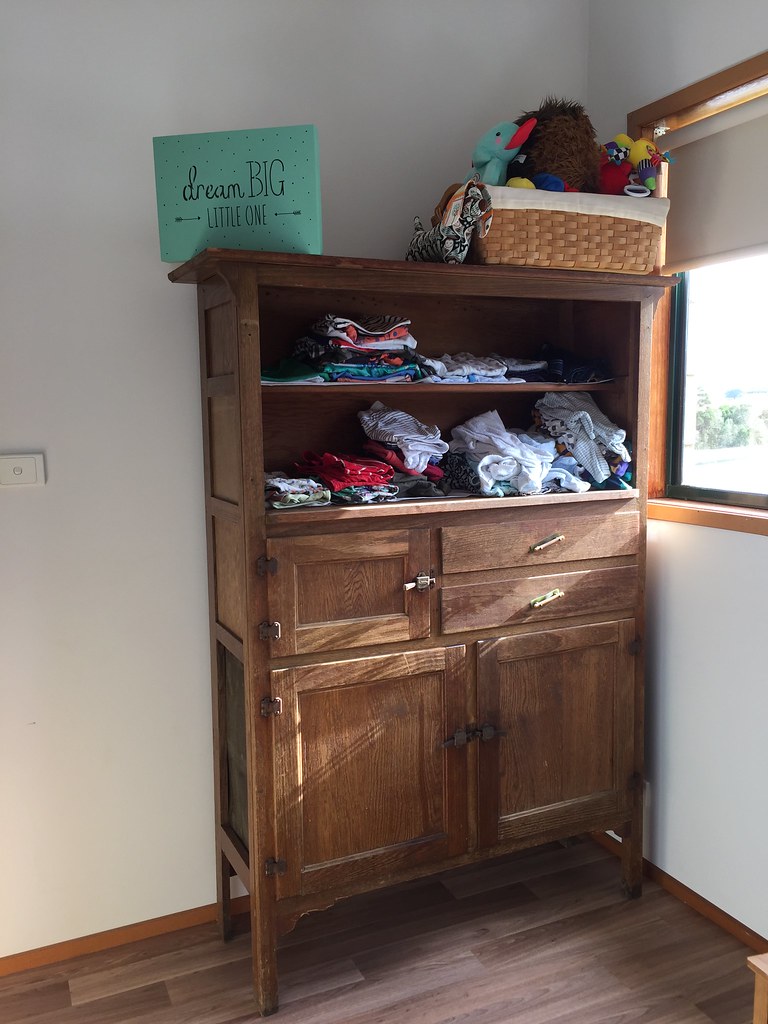 and you'll see this pretty ancient old cabinet... again, picked up from grandma's house and again, harking from her parent's place too. this guy used to be in my grandparent's shed, housing tools and such, and before that, housing my great grandfather's beer making supplies.
before that, i'm assuming it was some kind of pantry cupboard as it has wire mesh in the bottom section (meat safe style) and a little metal lined cold box too!
for now though, it's the perfect wardrobe for ag's clothes! 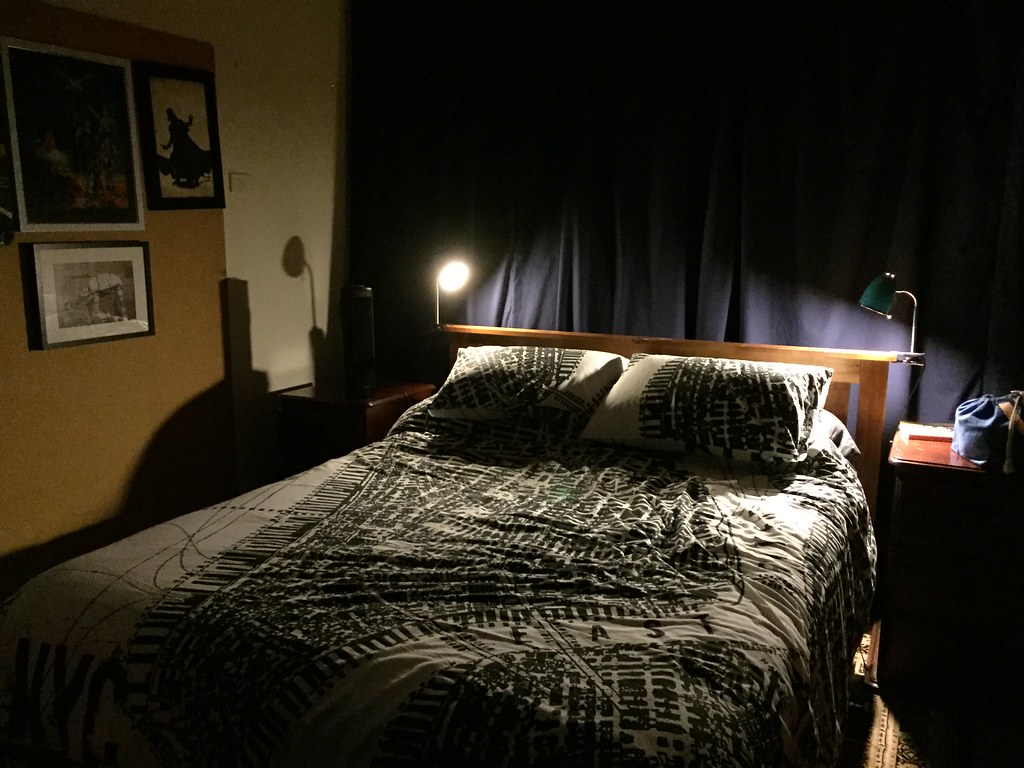 our main living space was built as a pool room, and thus has NO windows! after moving ag into the single bedroom, we've moved our bed into the living space, tucked into a corner to give us a wee bit of privacy if we have guests over...

it's a wee bit unconventional, but hey, it works! plus we get to use our awesome lamps a wee bit more often too!

what kind of space do you live in? massive pool table in your living space he he?
Posted by nicole at 4:15 PM 4 comments: