found a wee bit of time yesterday afternoon so put together another episode of my knitting vlog!
i'm finding them quite fun to make, now i've got the hard parts down pat...
now to work on improving the lighting and such... and maybe stop saying 'um' so much... it will all come together eventually i'm sure!

it's over on youtube here and below are a few links to things i talked about.

tell me what you think? do you watch other knitters on youtube? who are your favourites?
Posted by nicole at 9:00 AM No comments:

this time last year... well i was feeling quite uncomfortable to say the least... after staying in hospital the night before, i was well into full blown labour after having my waters broken and being put on a pitocin drip a little after 8am.
those first few contractions were funny, but their strength grew and grew and i wasn't giggling about them for long! i was soon asking everyone within earshot 'why would someone do this more than once???'
after a few hours, i was getting pretty uncomfortable and decided to give some gas a go for pain relief... it really didn't seem to do much, but it gave me something to concentrate on when i felt those contractions coming.

the midwife checked on my progress when i started mentioning more pain relief and i was relieved to hear i was nearly fully dilated and soon was feeling the need to push!
fast forward an hour and a half, i was still pushing and getting nowhere quickly. except tired that is, i was pretty tired by this stage... actually, i was exhausted!
my gp was called in, and strongly recommended an epidural to give me a bit of a break, and to let the contractions do some more work before perhaps having a go at getting bubs out with some help. i accepted gratefully. after 30 minutes or so, i was resting a little more comfortably, though could still feel every contraction through my left side.

another hour or so later, our little fella had made a little progress in coming out but not a huge amount.
we made the decision to use some extra measures to help get him out so off to theatre we went! bb had to get changed into some beautiful scrubs and i received a pretty wonderful top up to my epidural which meant i couldn't feel a thing from my ribs down.
i knew i was in safe hands, and that we were about to meet our bubba, but i was also shitting myself with nerves and couldn't stop shivering!
our beautiful gp went to work trying to coax our little one out, first with the vaccuum extractor, and then when that wasn't particularly successful, some forceps. it was very strange working with her and the midwife, pushing when i was contracting, but not being able to feel anything at all!
with those forceps, our son was born! pretty much tearing me asunder on the way out though, even with an episiotomy to try and stop it!

a minute or two later, we were here... 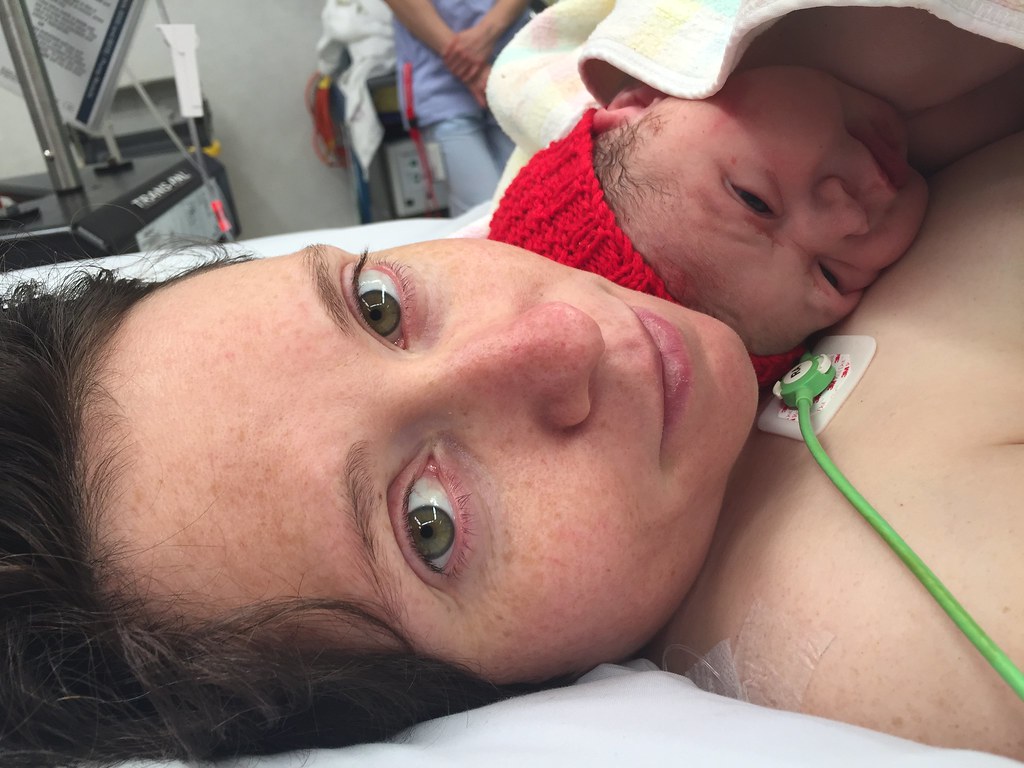 with me, tired, overwhelmed and completely in love. and the little fella, well looking a little grumpy to be honest. could you blame him though? what a day!

a year on, i can't believe just how different we both are. and just what an experience becoming a mumma has been, humbling, eye-opening and completely life changing.

the battle wounds have healed, time has passed and now i kind of get why folks would go back for more. what a trip!

in the last taking stock post i wrote up, i mentioned wanting to start a v-log but not being sure about the logistics...

well it's taken me the better part of a day, but the first episode is now up on youtube!

it's all about what i'm knitting at the moment... and i'm hoping to maybe pop one up every couple of weeks. will see how that goes he he!

pour yourself a cup of tea (if you're into tea that is!) and have a watch!

what do you think? are you a knitting vodcast watcher? what are your favourite ones to watch?
Posted by nicole at 8:04 PM 4 comments: