a few slow burn projects happening in these here parts, hence why the projects aren't flying off my needles to be blogged about...
let me share some stories though...

this first project has been on my needles for quite a while. since april according to my ravelry page and this post.
however, i did a silly thing... in my haste to gleefully cast on a beautiful new project, i neglected the one thing i constantly talk about, SWATCH!
what a fool! 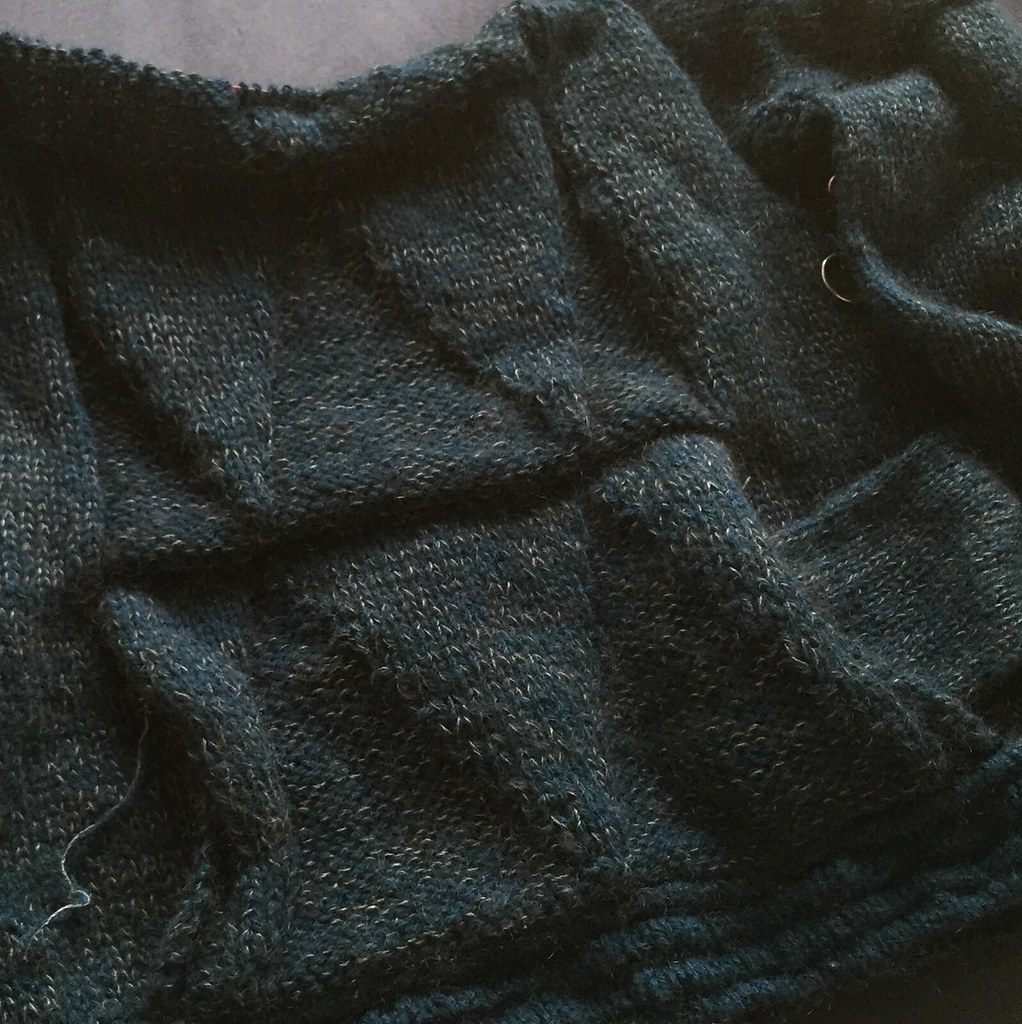 while the texture is absolutely gorgeous, my row gauge is CRAZY different to the patterns... this means that my jumper won't cover nearly what i would want it to in the belly area, even once it's current tenant has left!

i've been thinking that i would just rip it back to the pocket, and fix it from there, but i think it will be much better served if i rip the entire project out and start anew. eventually.
i need to find a particularly motivated day to do all that ripping and re-balling as i have moved onto bigger and better things...

this jumper was one i promised my brother for his birthday. his birthday was in january folks! 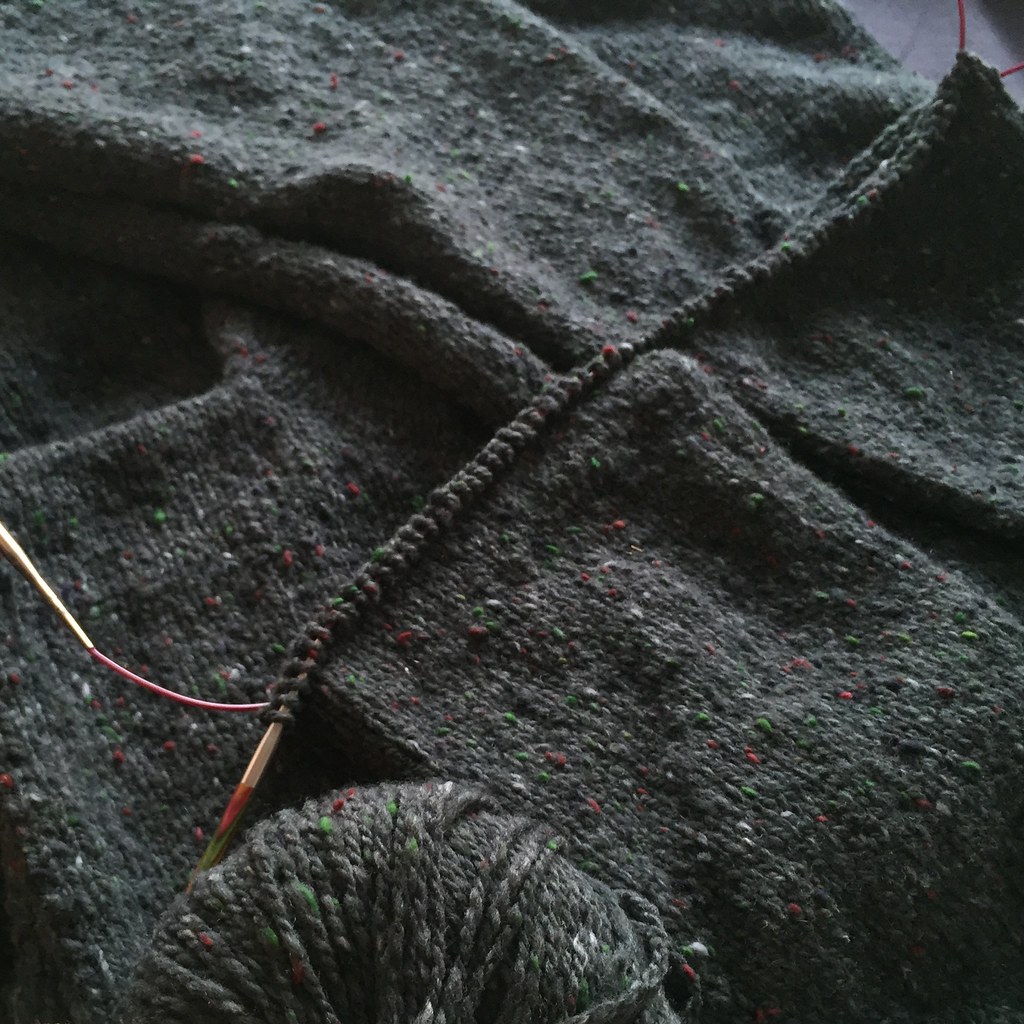 it is obviously plenty overdue, and i'd love to get it to him sooner rather than later. especially as this whole winter thing seems to be wrapping itself up!
the body is done, and i'm just working on the sleeves... though i'm not unconvinced i won't run out of wool! thankfully i know exactly where to get more he he!

i've banned myself from starting this project until i get my brother's jumper finished, but... 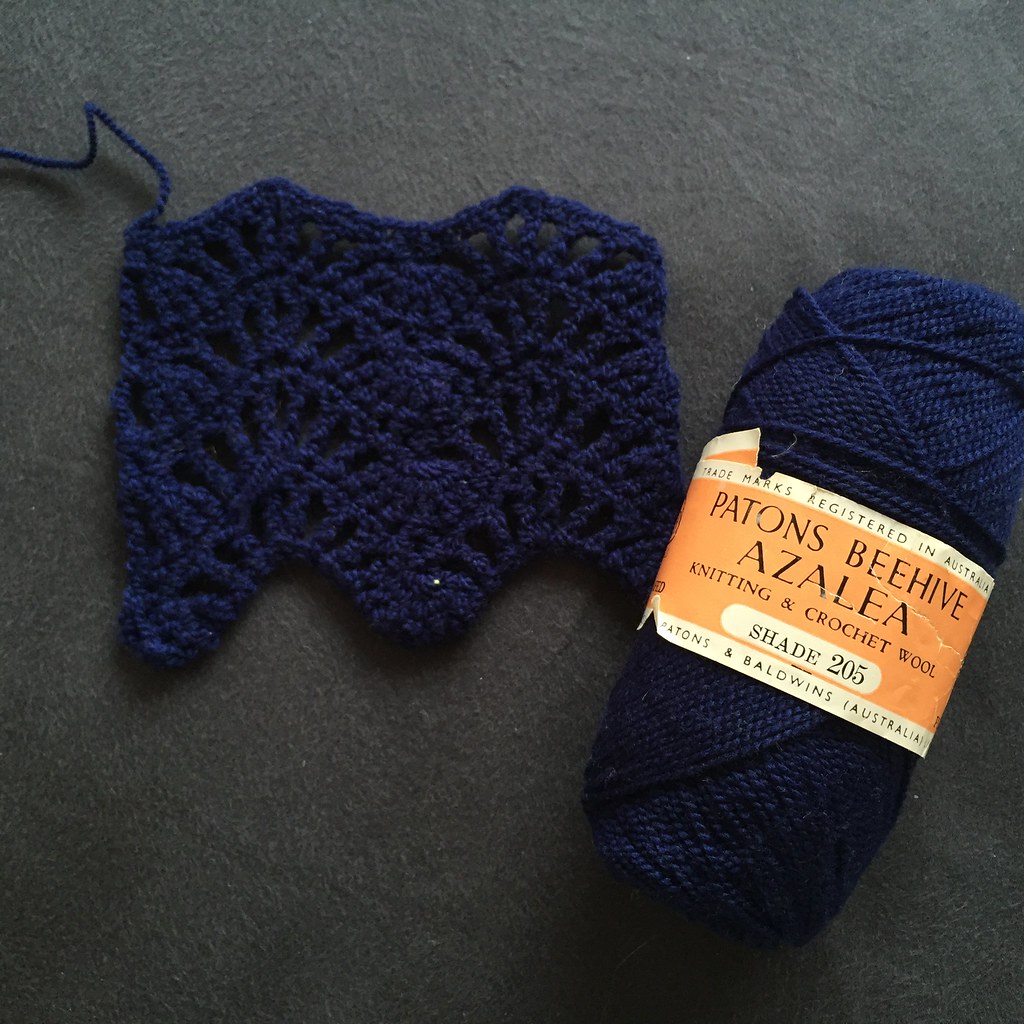 this yarn, and this swatch are going to become a little crocheted baby blanket.
i couldn't help but swatch for it over the weekend just gone, which i spent away with an absolutely gorgeous group of crafty ladies in an equally gorgeous old country homestead. i'd write a post about it, but i took ZERO photos and just spent the entire weekend eating, crafting, chatting and relaxing in equal measure. i'm sure i'll mention it a bit though as it was truly invigorating and just what i needed!

anywho, back to the crocheted blanket... this yarn has been in my stash for a while, and i have a decent amount of it too. pretty sure it was inherited from my grandmothers stash when she passed away, or potentially her sister's... either way, a nice, light, vintage yarn, in a gorgeous navy that should make the perfect lacy baby blanket!
when i allow myself to get started...

this project is still not even beyond dream stage... i took it away on the weekend, thinking maybe i could get a swatch done for it, but it just didn't happen! 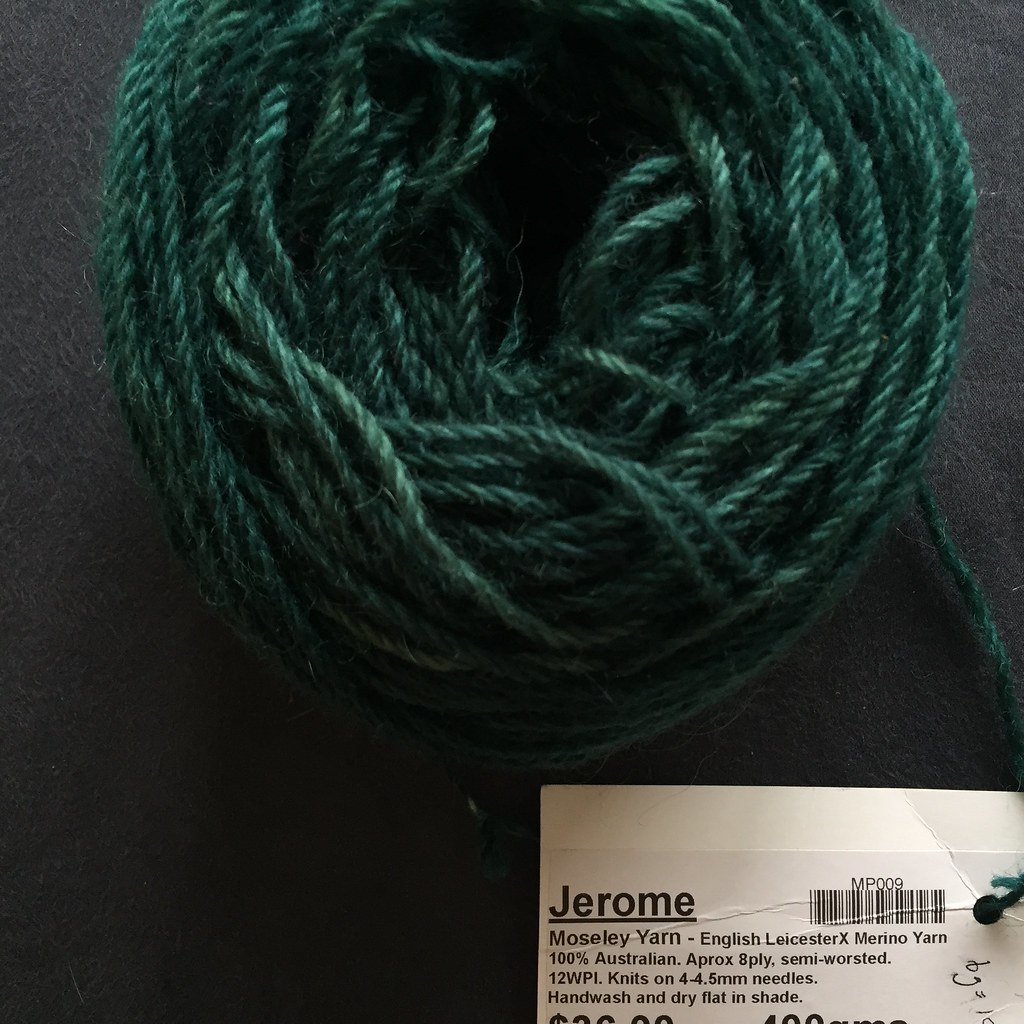 the yarn was purchased at last year's sheep and wool show, and there are plans bubbling away in my brain to turn it into a milo vest.
but nicole, i might hear you say, you've knit 1283702 milo vests. but i've never knit one for myself dear readers!
the milo vest pattern goes up to a 6 year old size, but i'd really love one for myself!
hence why this project is in the 'dream' stage, it's going to take a bit of work!
grown up adult ladies have quite the different body structure to 6 year old folks so it'll take a bit of manipulation to account for the extra lumps and bumps.
i'm confident i can get there though, though maybe not for a while...

and finally, the last thing on my imminent knitting agenda... 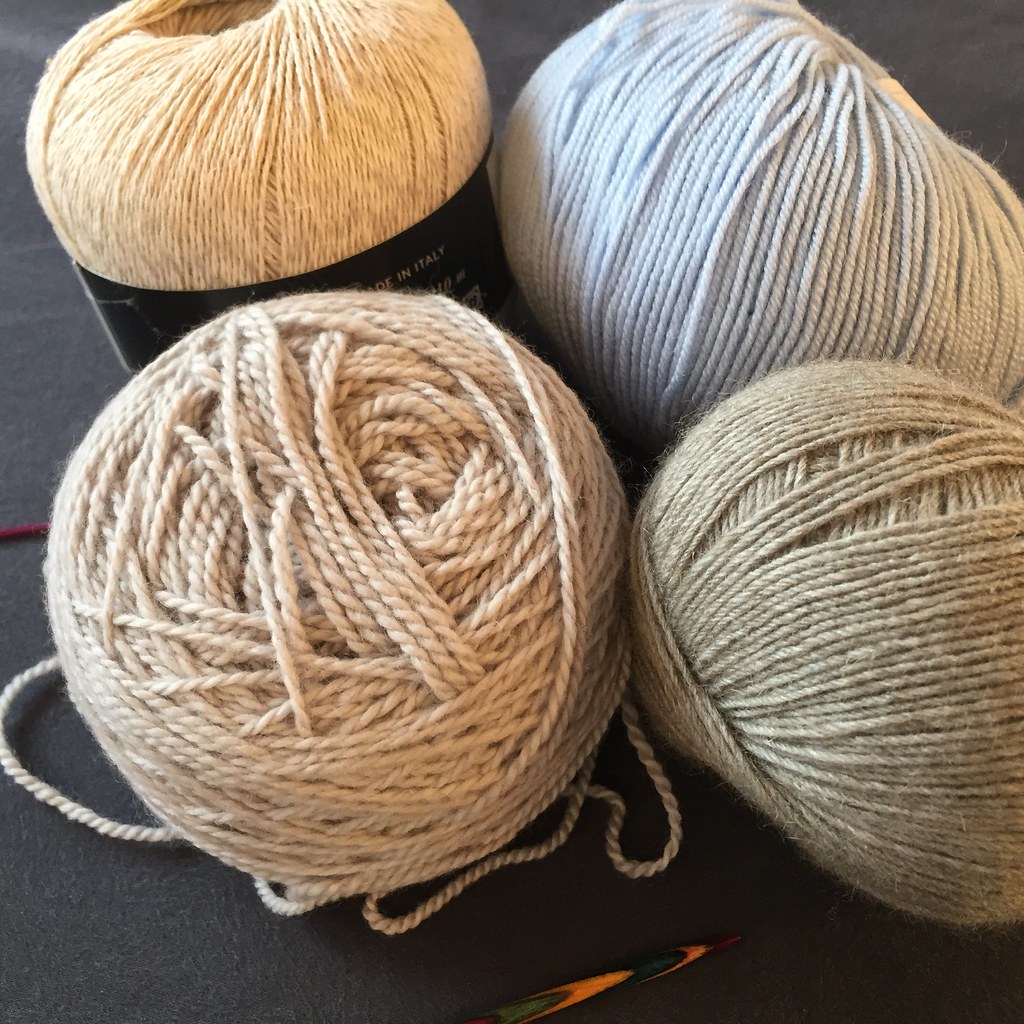 i've been on a bit of a mission the last month or so of work, to get all of the single ball samples (a single ball, knitted in stockinette stitch to show off the texture of the knitted yarn) that were missing in the shop, completed! these are the four that are left.
they don't take too long (a couple of nights of knitting at most) and are super mindless! i think i'll aim to get these done in between running out of wool for my brother's jumper sleeves (which will happen after a few rows this morning) and being able to get to melbourne town to pick up some more (most likely next week!).
hopefully while i'm in the shop, picking up the extra ball i'll need, i'll be able to resist the siren call of new yarn! although i've brought the stash down a wee bit with lots of baby knits, it's still a sizeable beast! would love to bring it down a little more before starting any other big projects!

what have you been working on lately? what stories are your needles telling?
Posted by nicole at 10:43 AM 2 comments:

thought it might be high time for a bit of a garden update, seeing as it's almost been two months since my last...

the rocket is doing all sorts of good things.
i'm having more than a little trouble keeping up with it's output actually! there's been quite a few rockety salads with meals, but i'm also thinking of some rocket and feta mini quiches for the freezer are on the cards too! 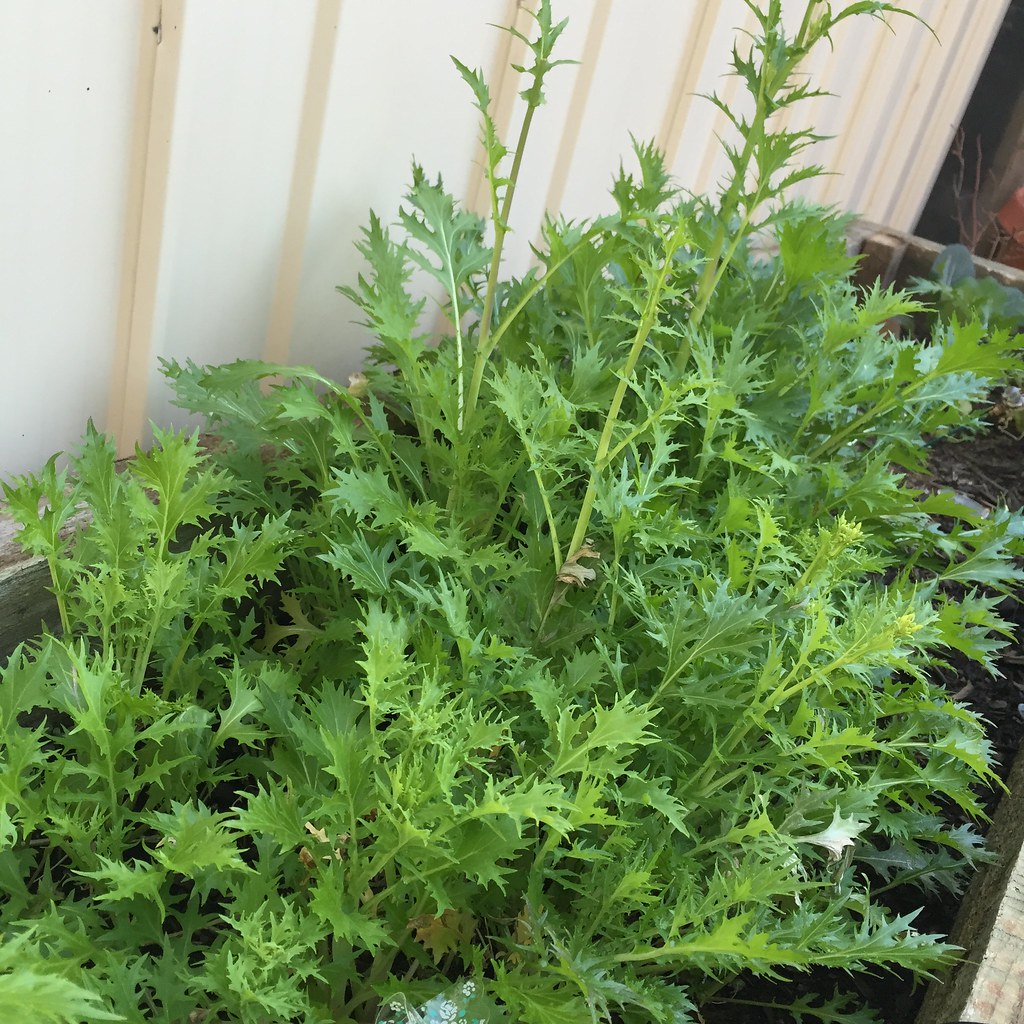 it's somewhat overtaken the bed, though there has been one or two other things popping up too... 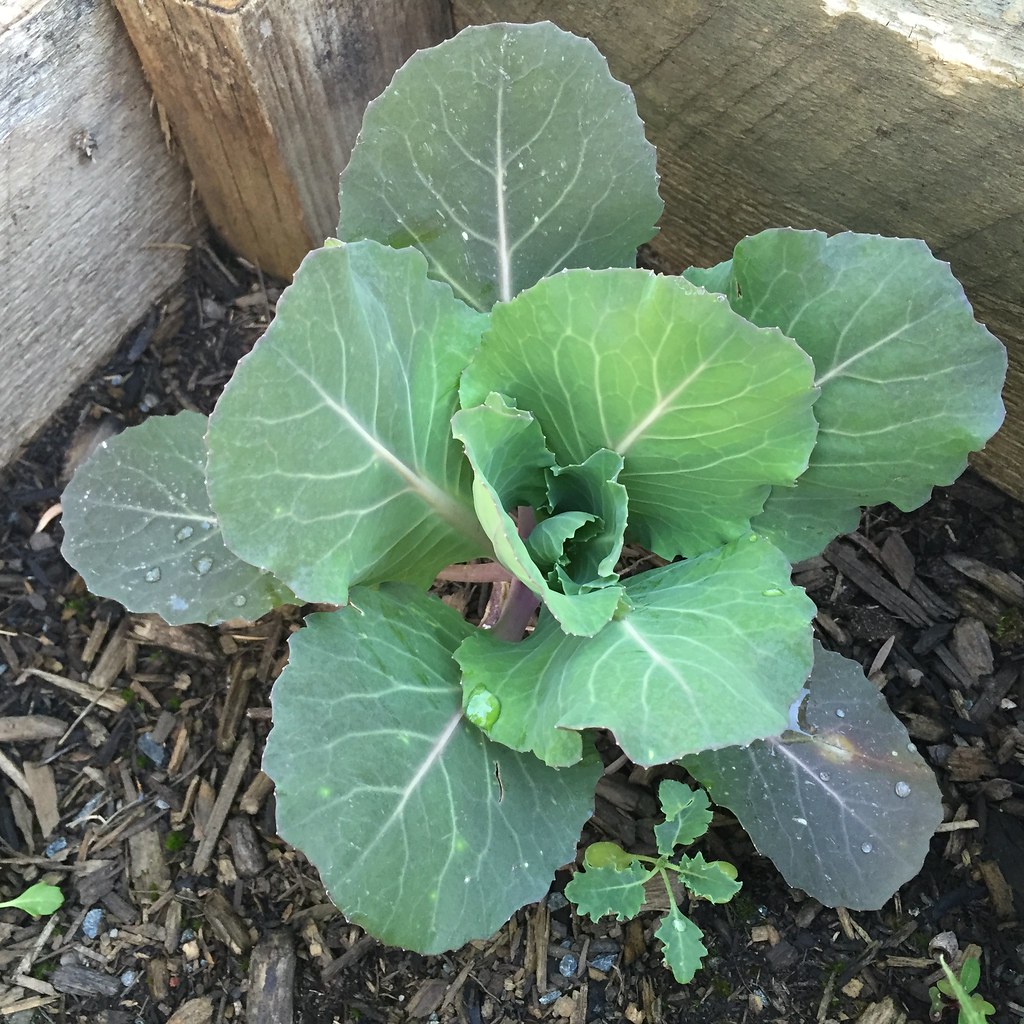 this to me looks a bit like a cauliflower... but it could also be a cabbage i guess... definitely some kind of brassica in any case. and i'm more than happy to have it there! 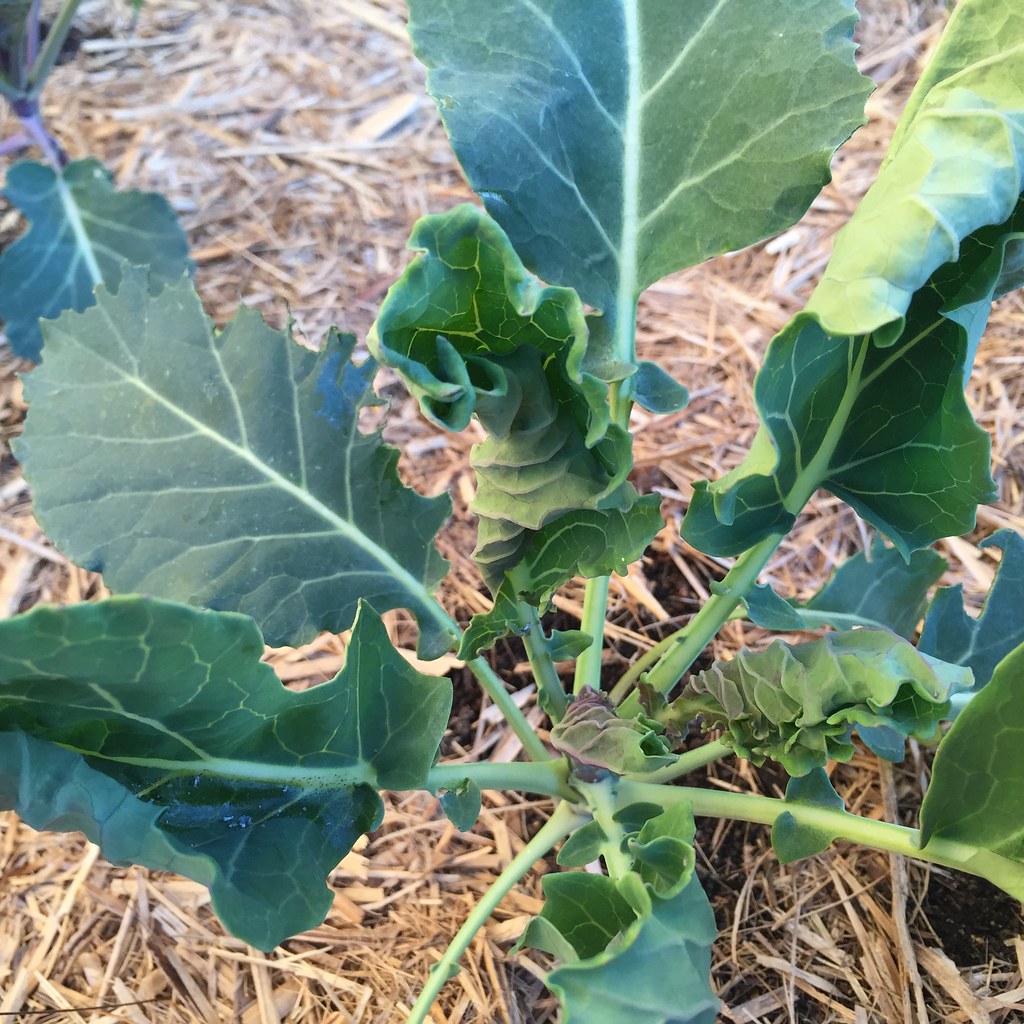 this little broccoli seedling sure has grown since i popped it in the ground.
i made an attempt to grow my own seedlings, and by attempt i mean i threw some (quite old) broccoli seeds at the soil. not surprisingly, nothing came up!
thankfully i found some seedlings at my favourite little produce place and for only 50 cents a piece to boot!

i planted four, and so far they're all looking pretty happy!

this collection of leafy greens are slowly SLOWLY making their mark... 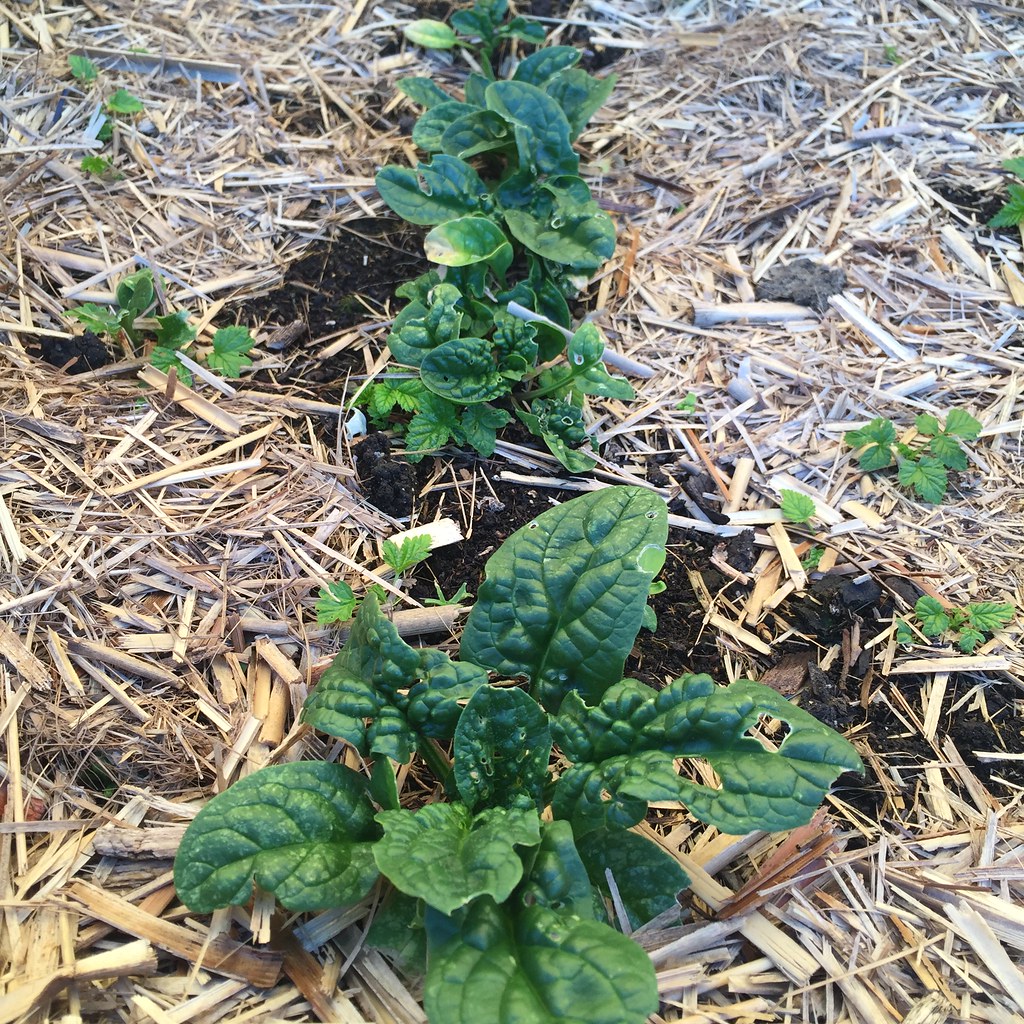 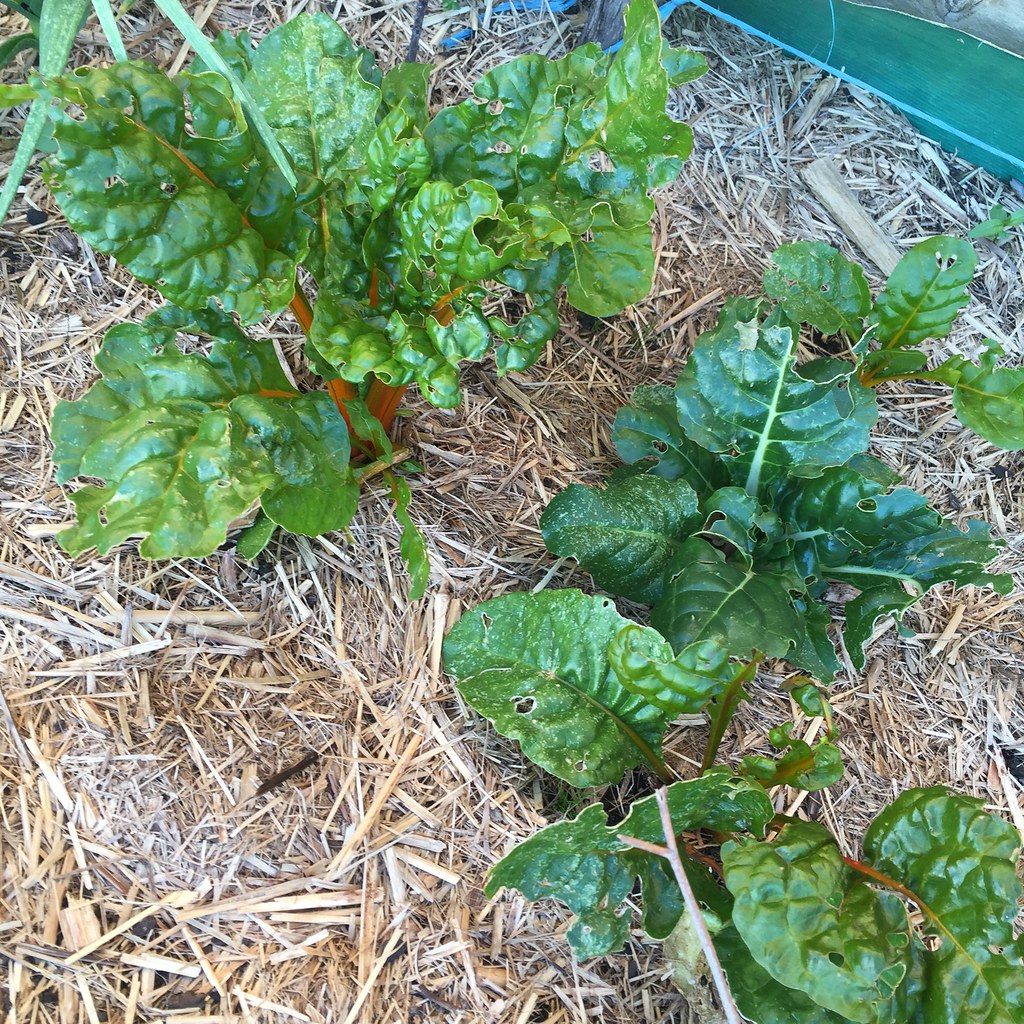 the poor spinach is constantly battling against raspberry shoots that are popping up from the neighbouring bed, though it's certainly coming into it's own.
and the rainbow chard is looking like it's just about ready for a few small harvests!

i'm so excited to see so much growth in this little patch in the chook yard though... 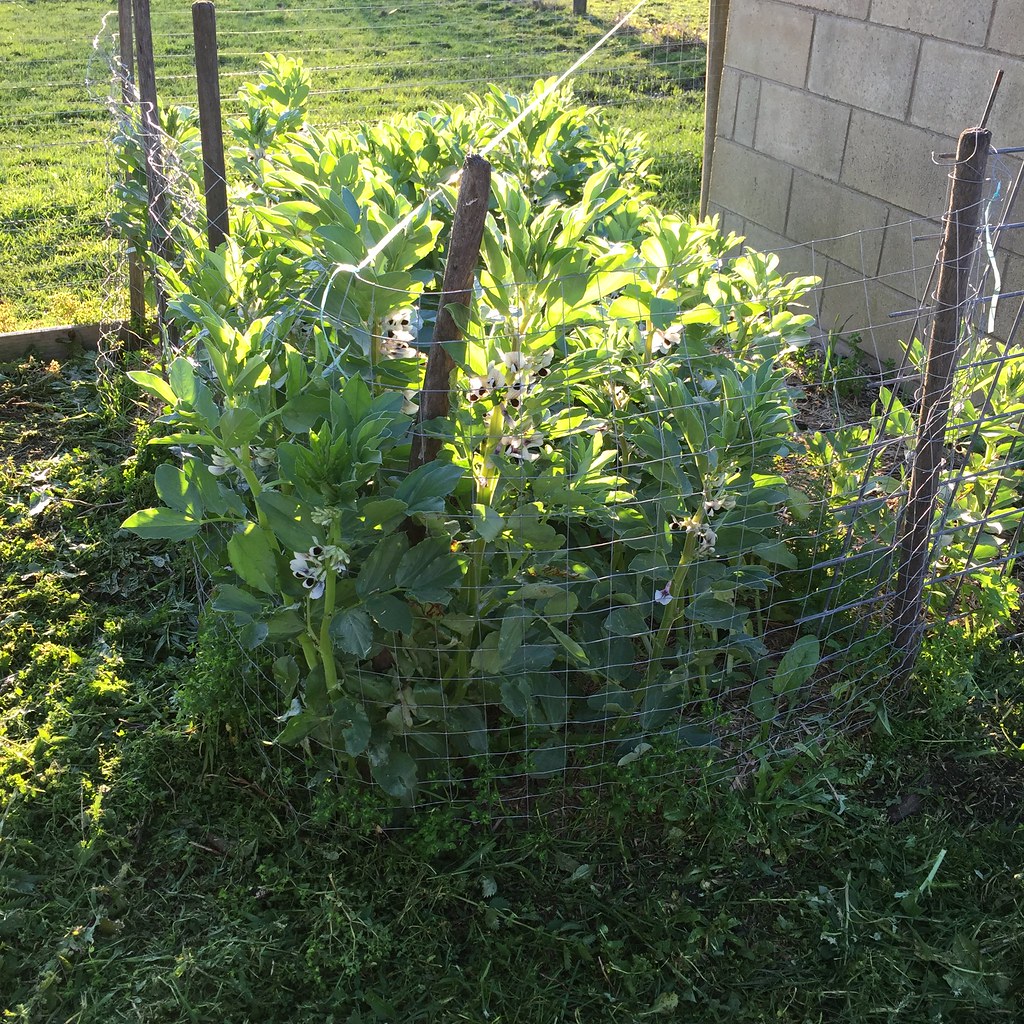 check out how big the broadies are getting!!! and how splendid they look in the late afternoon sun!

while i was taking these photos, i started to get a little worried for the carrots i'd planted in between the broad beans... 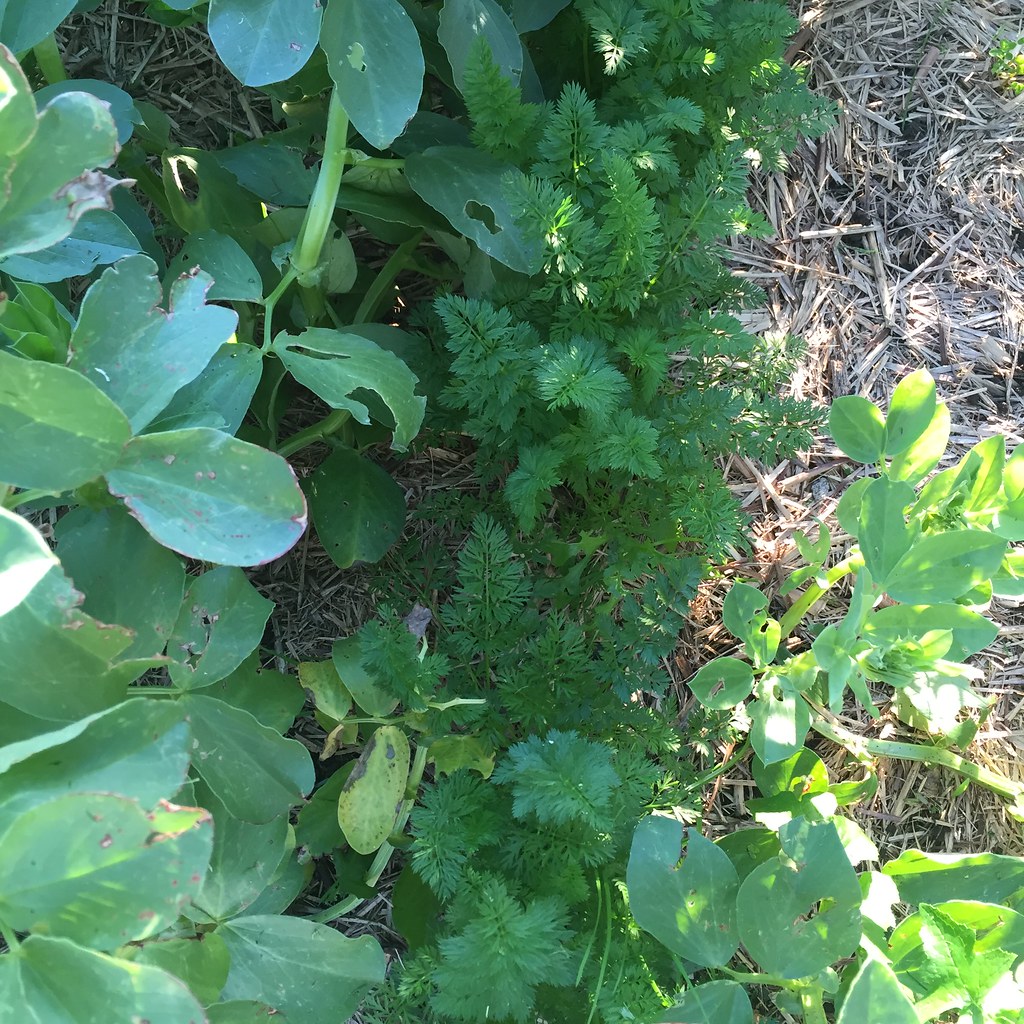 but they're looking pretty happy too!
they could probably do with a little thinning... i may even get out and get that done tomorrow morning if the beautiful weather we've been having keeps up!
the days have been gorgeously sunny, the wind at a minimum and it has been inspiring me to get done all sorts of spring cleaning type activities! might be that ol' nesting instinct kicking in too i guess!

what's been growing in your patch recently? are you feeling any spring vibes yet?
Posted by nicole at 6:41 PM No comments:

and an alternative title for this little collection could be ALL of the baby knits...

after putting off starting baby knits, as i had my big five unfinished projects to finish for the year, i'm now well and truly hooked!
they're so teeny and quick to knit, oh and they are ridiculously cute!

the first off the needles was a milo vest for milo may. 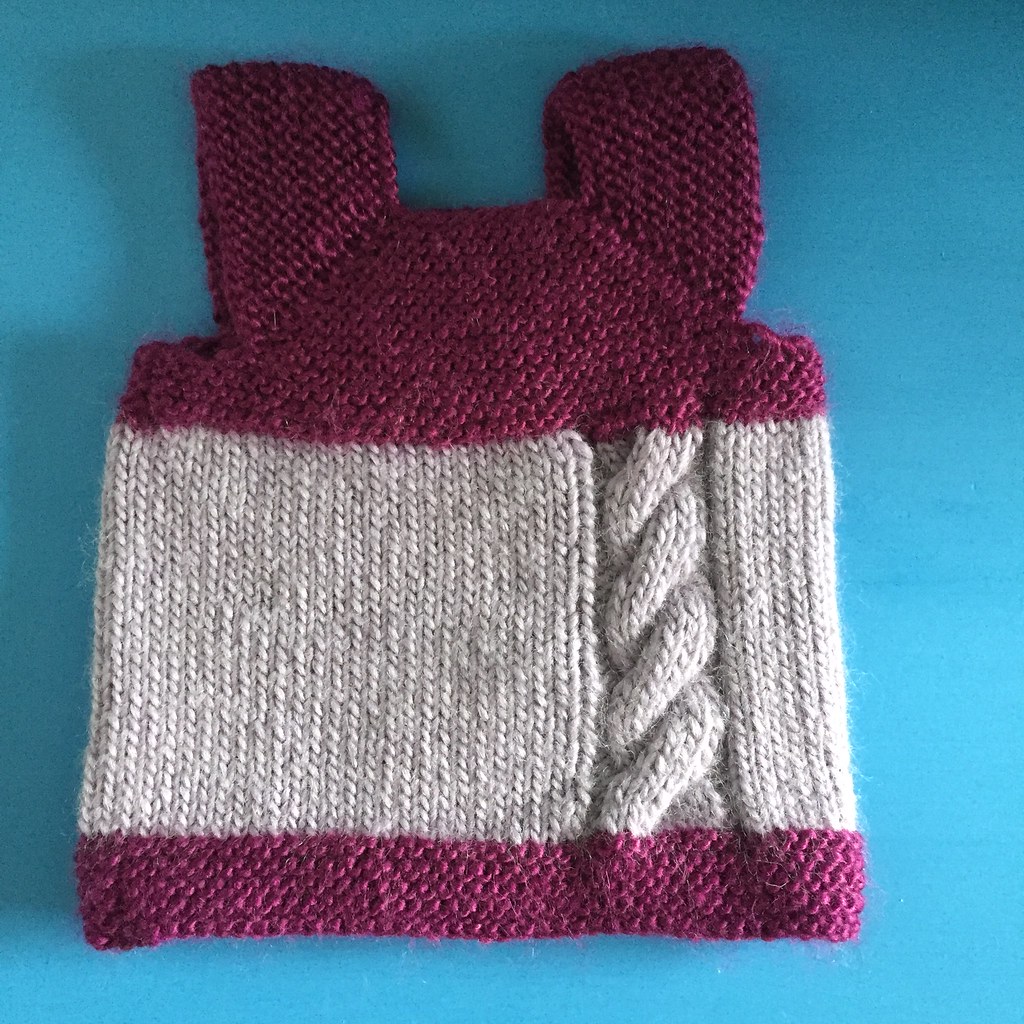 i knit it up in some bits and pieces i had in my stash, hence the two different colours, and much shorter body than i'd prefer...
the lighter purple knit up as more of an aran weight, than a dk, so it's going to be super toasty warm as it's super dense!

next up is the hundreds cardigan. 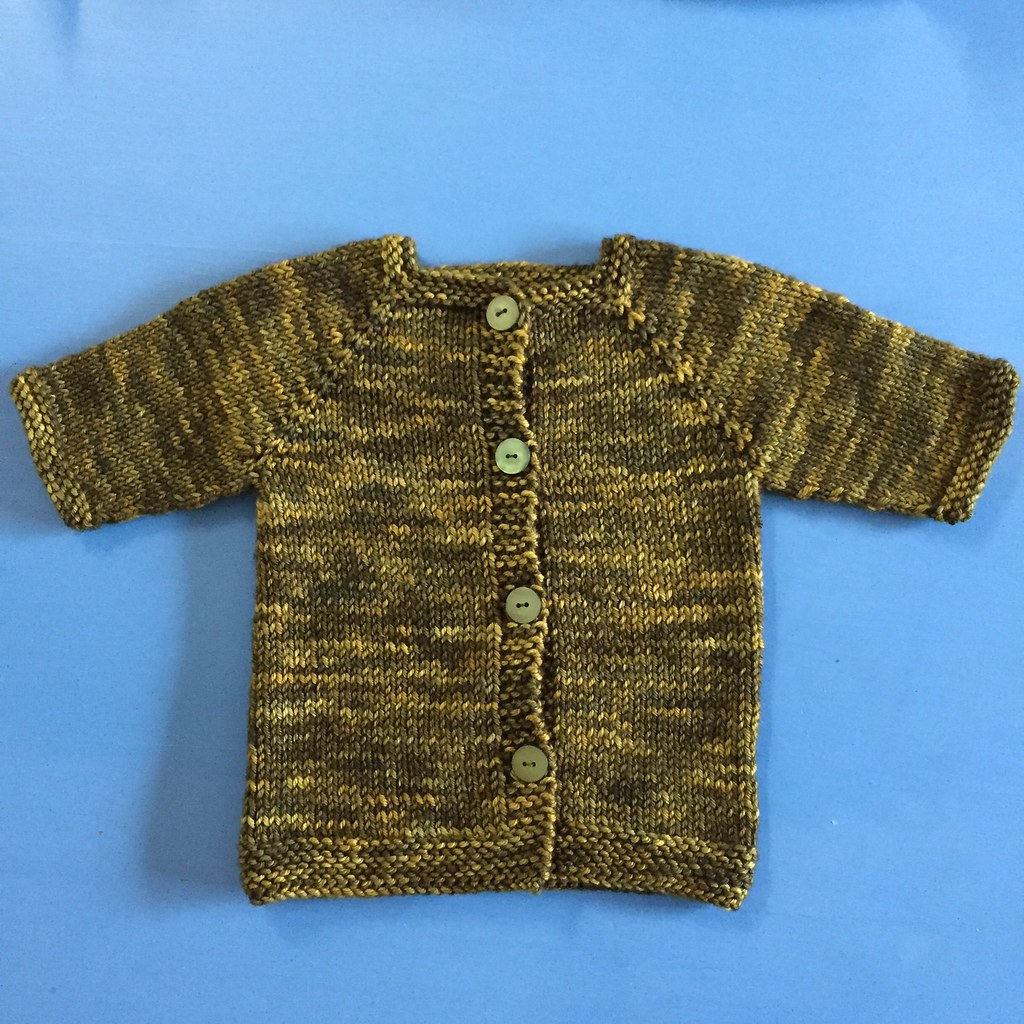 this one is knit up in a skein of miss click clack dk i picked up at the hand-knitter's guild market.
i love LOVE this colourway, it's called 'patience young grasshopper' of which i had none. this skein was knitted up within a month of purchase he he!

then there was another tikkiknits pattern, what big eyes you have. 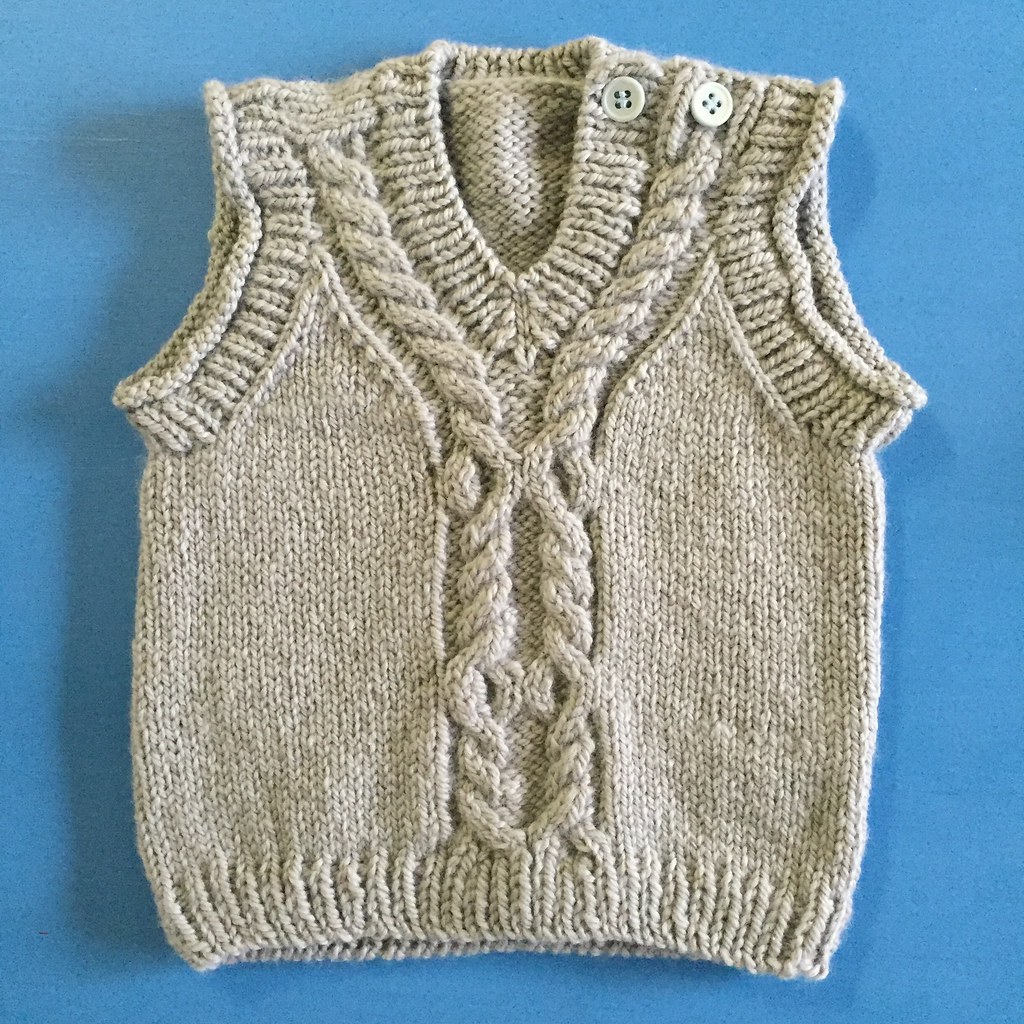 i found this pattern a little more of a thinker than georgie's other patterns, with a few tricksy bits of picking up stitches and such to keep everything seamless. but as always with georgie's patterns, the finishes are superb! well worth any fiddliness.
super glad i tried something new as look how gosh-darn cute this looks!
i knit it up in wooldays scout and my-oh-my do i love this yarn. if it came in a bigger range of colours, it would be my desert-island yarn choice for sure!
and if you have no idea what i'm talking about with a desert-island yarn choice, do yourself a favour and check out the pomcast, lydia and sophie are the coolest and cutest folks podcasting around! they never fail to make me giggle!

these little baby hats FLY off the needles! each one was completed in an afternoon of knitting, and both were made without a pattern, just using my off the cuff, that looks right, time to start decreasing method.
maybe i should do some proper maths and actually make these things into proper patterns... one day! 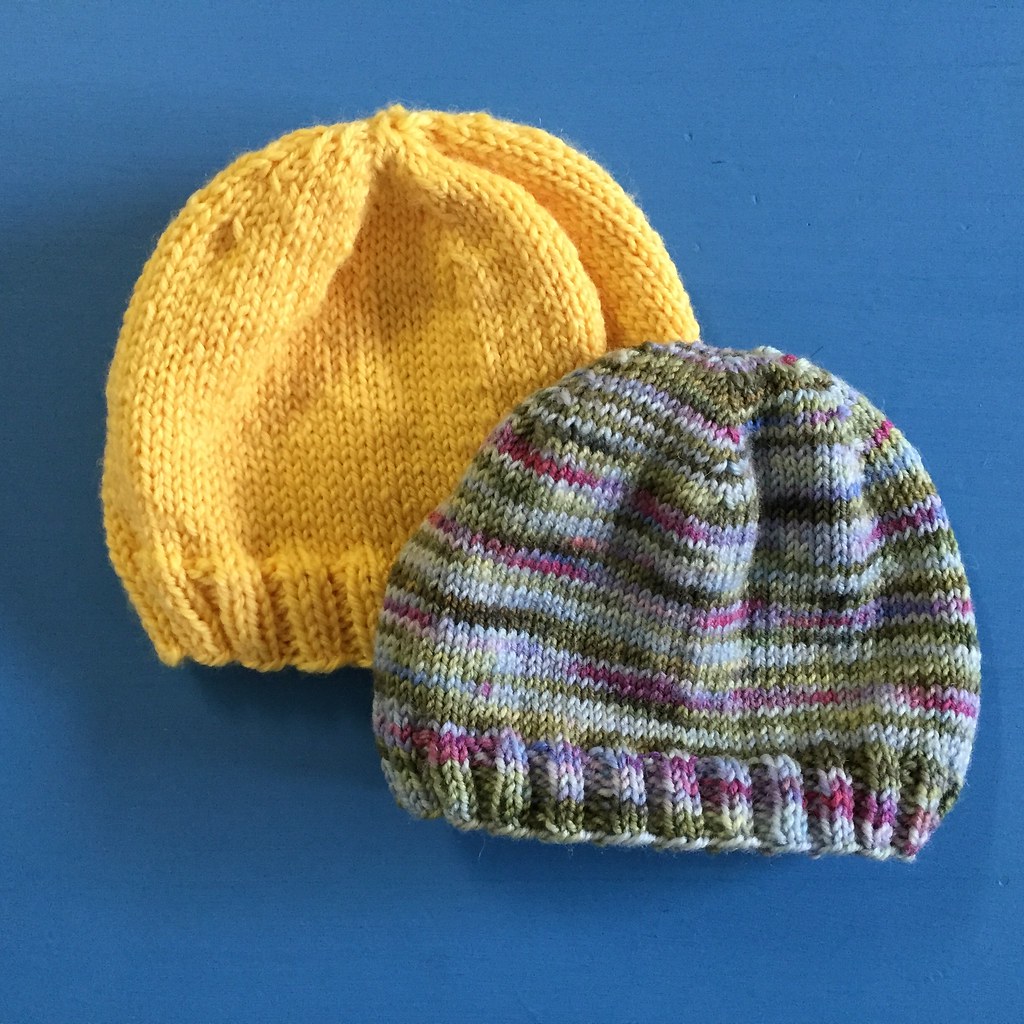 anywho, back to these hats...
both were knitted up from wee balls in my stash. another great thing about baby hat knitting, they don't use much yarn!
the colourful one was colinette jitterbug leftover from these socks, and the yellow was bendigo luxury 8ply leftover from a scarf that my mum knit a few years ago.

and lastly, there are this pair of twin milos, for the cutest little twin boys. 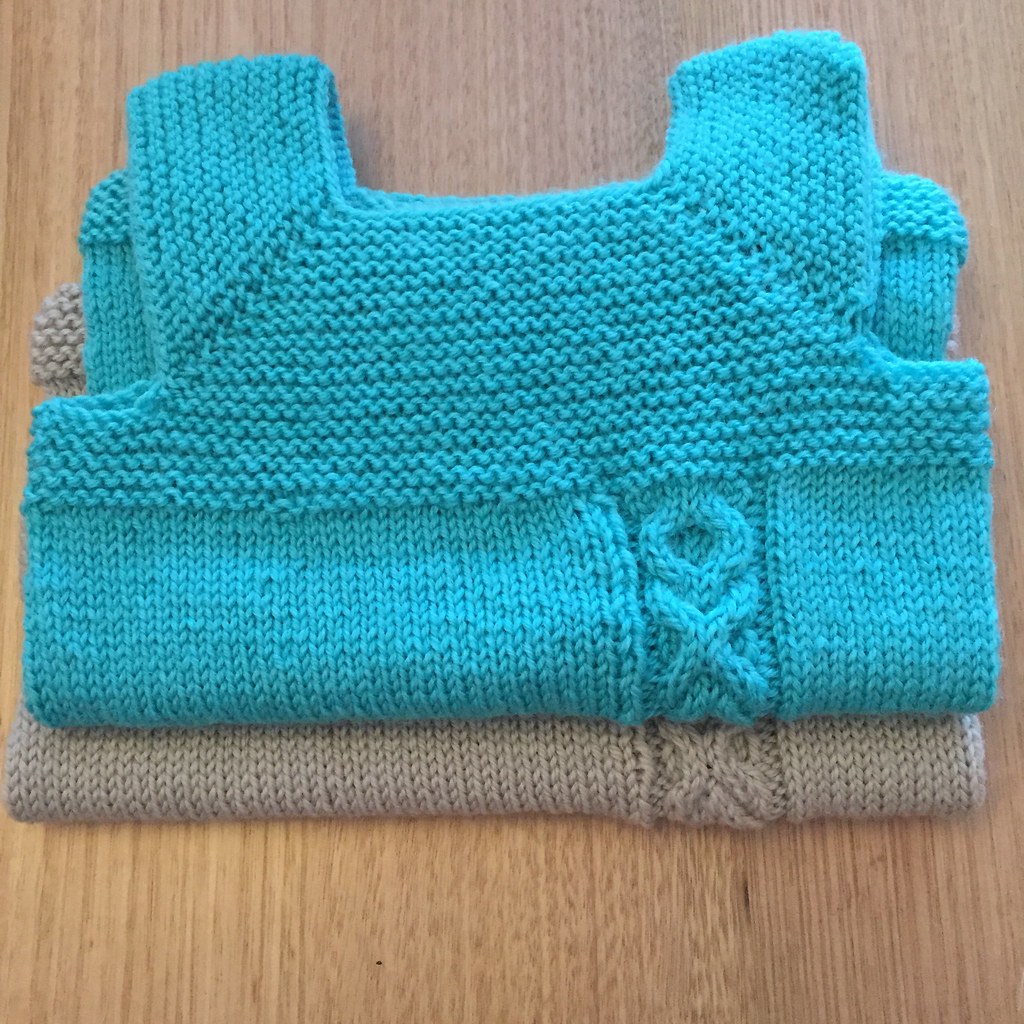 while i was knitting up the wee purple milo above, i couldn't help but think of how ace it would be to knit up the boys a pair of matching, but not really, milos...
both of these beauties were knit out of yarn i already had in my stash, the teal, merino magic, and the neutral, bendigo woollen mills and i knit them both in the 18month size, with a little bit of extra length... hopefully that will mean they might get a couple of winters out of them! fingers crossed!

if you have a little peruse of my ravelry projects, you might notice that a lot of these projects have been done for a wee little while... i procrastinated making button choices for the cardigan and grey vest, and then took my sweet time to write this post!
the combination of commuting to melbourne for work, and being quite heavily pregnant have definitely sapped a lot of motivation for writing posts, hence it being almost a month and a half since my last post! hoping that now i'm on maternity leave, i'll find the mental space to get back here and writing... before i no doubt drop off the radar again when our little one comes along he he.
we will see what the future holds!

what are you favourite baby knits?
Posted by nicole at 11:32 AM 3 comments: