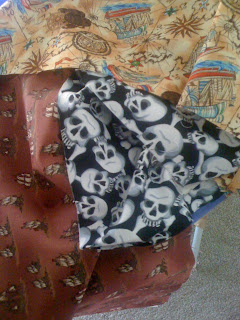 a few weeks ago, i got an idea. my friend, heidi moved into a new house and themed her kitchen in a pirate theme. i wanted to make her something special as a housewarming present. so i decided on bunting. pirate bunting. bunting made out of pirate themed fabrics. i let this idea stew for a while, and then it was heidi's birthday! now i had to get moving on the idea...
i asked brianna where to get some nice pirate themed fabrics and she suggested the patchwork shop in the keith fagg tile shop. they had LOTS of fabrics. a store FULL of lots and lots and lots of different, varied fabrics. it took a while but i found a few fabrics that i thought were suitable... 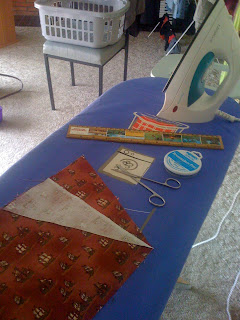 i decided that i wanted the triangles to be 20cm across the top. i got my ruler and scissors out. not to mention my iron (THAT doesn't get that much use). i was lazy and couldn't be bothered with a template so i just used the other triangles that i had already cut up :D 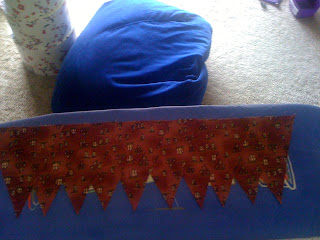 after a LOT of cutting and pinning and pressing they were all done! no really, a lot of cutting, i can't see myself doing much patchwork in the future, unless i buy a rotary cutter... 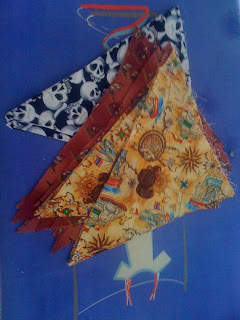 i decided to sew 2 pieces together, rather than hemming each individual triangle. more laziness on my part but i think it worked out better. now it doesn't have to be hung against a wall :D it can be hung anywhere! 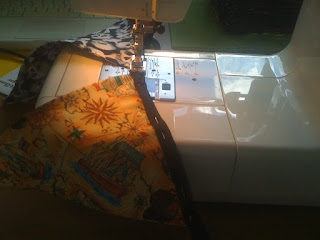 to connect all the lovely triangles together i used bias binding. i'd never used bias binding before. truthfully i had no idea what it was... luckily brianna was on hand to let me know. and thankfully, because it made things so much easier!i just had to pin it iron it and sew it all up!
being the absolute moron that i am, i forgot to take a final picture. i thought it looked good though and i hoped heidi likes it too!
happy birthday heidi! (yes i know it was like a month ago, i've been busy!)
Posted by nicole at 1:46 PM 2 comments: 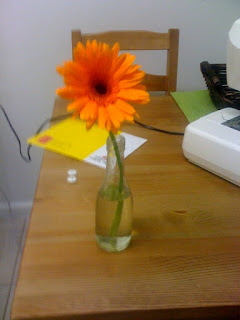 yes it's been a while, as brianna keeps reminding me.
you can definitely tell i'm back at uni, as well as the lack of regular blog posts, the house is also a lot more messy and if it wasn't for all the rain, the garden would be looking a lot more bereft.
despite having a tonne of uni work to get done (3 assessment tasks completed before the 4th week is over) i have been getting up to a few crafty fun things...
first and foremost of course, beanies!i finished up dancing dirt into the snow about a week ago now. i may have run out of wool, quite close to the end and had to use a bit of a different one in there. it matches mostly... 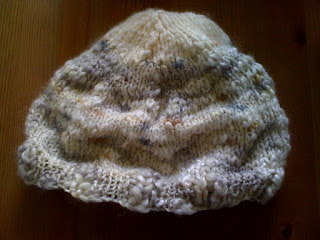 and of course, with the finish of one beanie comes the beginning of another, this one i'm calling golden fir.
115 stitches on 6.5 needles. wayyyyyyy too many stitches i think, never a good idea to cast on while drinking, my maths were wayyyy out... 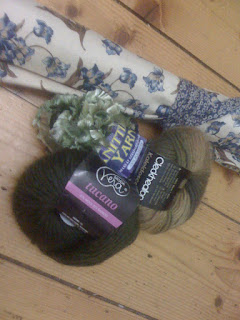 just as i suspected, this one turned out huuuuuge. oh well, not so much a beanie as it is a hat. will still do a good job of keeping your head warm though :D 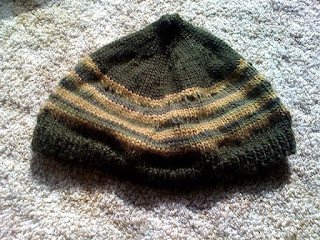 so now i'm 5 beanies in. only 5 to go, halfway!!! wooooooo!
i'm having some epic big blankie guilt, which i think is mainly coming from how damn cold this weather is...
so the next beanie might be a little while. ripple blankie might be getting some love...
Posted by nicole at 3:46 PM 1 comment: 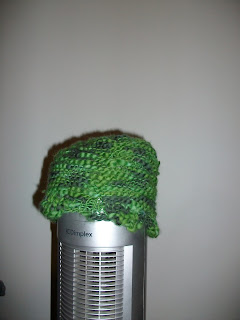 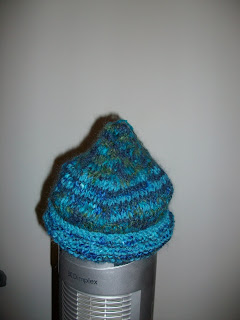 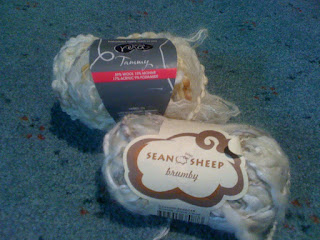 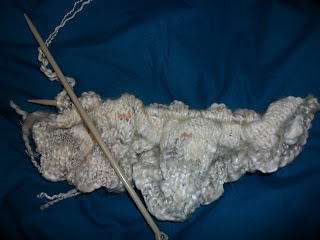 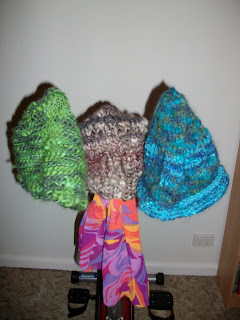 three lovely completed beanies, all in a row. and the most use that my exercise bike has had in a looooooooooong time.
Posted by nicole at 9:24 PM 2 comments:

yup that's right, something other than beanies... don't worry i'm just as shocked and surprised as you are.
this ta-da has been a long time coming, i started it this long ago. it's been a work in progress as work/holidays/150 kms got in the way.
mum may have also given me a little help with the clearing of the weeds. not to mention the buying of the plants and mulch. her credit card wins :D 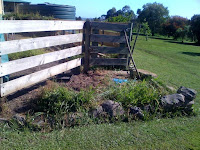 fast forward 2 months or so and we've got this. 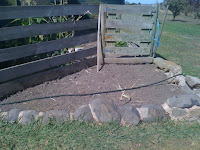 after a little retail therapy at big w (yes, i know, but no where else had the plants i wanted... the country sucks that way sometimes...), 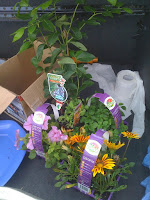 and a little hand-dirty planting, 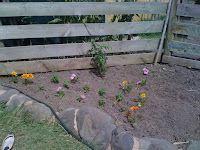 a bit of wet newspapering, 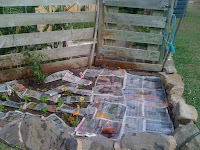 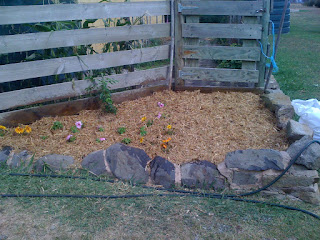 it was done!
ta-da!!!
colourful, pretty, loveliness!
poppies and gazania and petunias and impatiens aaaaaaaaaaaaaaaaand a BLUEBERRY!
a little, lovely blueberry bush. can't wait for that one to mature up and fruit. mmmmmmm blueberries.
i love when an afternoon of hardwork comes to a very fruitful ending.
Posted by nicole at 8:29 PM No comments: