this morning, i headed outside. i had some spare time before i started work because i'd gotten up nice and early (morning person routine, getting established :D), so i thought i'd make a start on a gardening project i've been putting off for a looooooong time!

there's a narrow garden bed that runs between the fence and the driveway that has been in a state of utter neglect for a little while. my neighbour that sold up and moved out at the end of april last year was the sole caretaker of this little garden strip and i don't think it's really been touched since! poor little garden bed!

so today was the day, i had a spare half hour, and i made a good start! i've gotten a good two metres clear of weeds.
i left a few bits and pieces where they were, namely a cute little daisy and some baby sprigs of ivy. hopefully they'll grow and grow and provide some nice ground cover :D 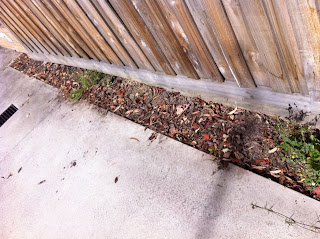 and hopefully i'll get a bit more time this week to tackle the other 15 or so metres of garden bed there is left to weed... 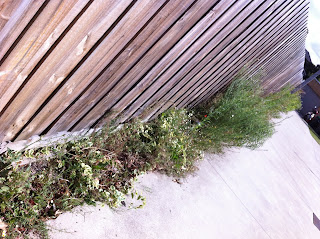 there's a LOT more plants in this section but there is also some almightily large weeds.
this one might take me a while...

playing along with my place and yours again. you can join in too!
Posted by nicole at 10:34 AM

Weeding, the bane of my existance. It is such a never ending job isn't it! I have a huge back yard and we pulled out quite a few plants but haven't replaced them yet and so there are Lots Of Weeds instead!

Good luck with yours!

I always wonder why the weeds will keep growing while the plants die from lack of care? Good Luck with your little project.

Go you! You're rocking this gardening caper!