phew! what a week it has been for me! since my last post, i've worked almost every day, so not too much time for blogging at all!
i had a package arrive the day after my last post... 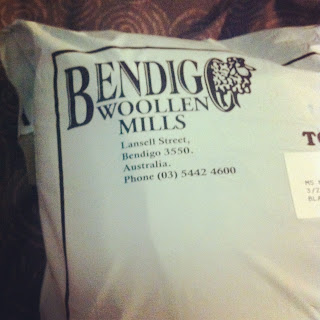 full to the brim with some beautiful wool for the crochet-a-long i'd joined in with.

naturally, i got to work straight away. i managed to get all 3 blocks done within the week and after putting it off for while, got them blocked out too.

i blocked them out to 9" squares. they're a bit smaller because i'm using an 8ply wool instead of the recommended 10 ply. i've also messed around with the pattern a little, making the 6" square a bit bigger. i think i'll do this with all of the 6" squares, so that i can have a 6x6 square layout at the end, no worrying about complex sizing of the squares.
i also took a bit of extra time and did a final round of single crochet around the outside of all of the squares, to make joining them together that much easier.

i'm very excited for it to be february now, bring on the next 3 squares!

now i'm going to kick back and have a bit of a relax, i have the next two days off work!

what have you been up to this week?
Posted by nicole at 6:00 PM

oooh i love the middle pattern nicole. you will have to tell me how you did that one. well done :)