i had a test today at 3. so instead of studying or being in any way productive, i procrastinated. it's how i roll.

i had these old bananas... they were looking pretty bruised up so i did really not want to eat them. bruisy bananas make me gag (i know that's pretty well a euphemism or whatever but NO) 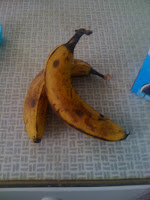 so out came the trusty old muffin recipe. this is a recipe my aunty gave me. my cousin was about one when she gave it to me and she's nine now so this piece of paper is at least eight years old... it's travelled with me to four different houses so it's pretty amazing i haven't ripped/burnt/covered it in muffin mix/thrown it out. 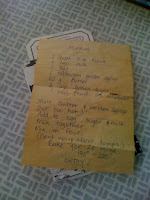 mix everything up in my big green mixing bowl. favourite that i got from my besties. i should really probably use a wooden spoon and traditional-it-up but i have to use metal spoons to serve it up so i try and save dishes for the boyfriends sake. 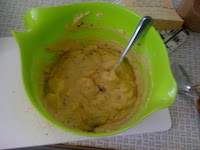 patty pans, just like when i was a kid... saves on mess too. i'm the lack of mess queen. 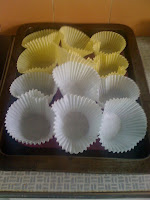 into the oven for a while. had to keep an eye on them as my oven is notoriously crap for baking. if you put anything on the top shelf it's sure to burn and if it's on the bottom shelf and you're not careful it'll burn on one side, leaving you with half burnt, half raw muffins/carrot cake. brianna at rollinginfabric has experienced that little gem... 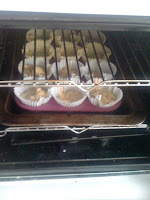 half an hour in the oven and voila. muffins for afternoon tea with study. although i honestly didn't really feel like them after licking the muffin mix out of the bowl. mmmmmm muffin mix. i did however take them to uni with me to share before/after the test. they were good to take the nerve off/commiserate with. commiserations for me unfortunately, i didn't do as well as i would've liked. this is to be expected though as i spent all morning sleeping/cleaning/baking and not actually studying...
Posted by nicole at 2:20 PM

Do you think there will be any left for work on Saturday night? Better than the day I had at work!

I love having those go-to comfort food recipes that travel with you from place to place. This looks like a great one!