wednesday morning was hairdresser day! i popped in, got a fresh dye job aaaaaand a new fringe :D
curlypops and i decided we would both do a big reveal today and i even remembered to take a before picture. 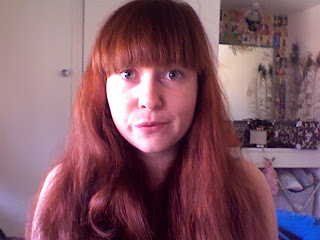 and an after picture... don't mind the photo-bomber in the background there... that's the boyfriend, he thought it to be hilarious that i was taking photos of myself to put on the internet and insisted i put this one with him 'ghosting' on here. also, the lighting is pretty bad, it's still the same colour but without the brown strip down my part (ewwww regrowth!) 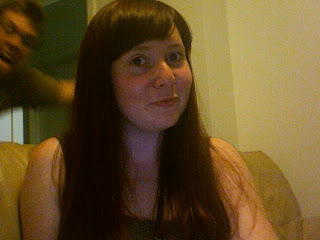 it would seem that this week is the week of new hairstyles with curlypops and car getting a new do too!
did you get your hair done this week too?
Posted by nicole at 11:11 PM

So cute! I love a good fringe.
The after shot is hilarious with your lovely boy in the background!