oops, seems as though i missed my weekly posting last week... trying to post on a tuesday isn't working sooooo well for me at the moment, we seem to be getting up later and later in the mornings, and tuesday is now mother's group meet up day.
so important for the sanity to be able to chat out baby issues with fellow mummas whose babes are around the same age and stage as ag.
anywho, i'll give mondays a bit of a go for the next little while he he.

today i thought i'd give you a little update on what's growing in the garden... with VERY little input from myself to be honest. i sprinkle a bit of water around every now and again (as does mum thankfully, otherwise i'm sure everything would've perished by now!) but i haven't really planted anything new for a VERY long time... everything seems to be thriving though and we're getting little bit and pieces of food here and there which is ace!

bb and i picked up this finger lime tree in the months before ag came along (feels like a life time ago he he) and i didn't have high hopes for it to be honest... 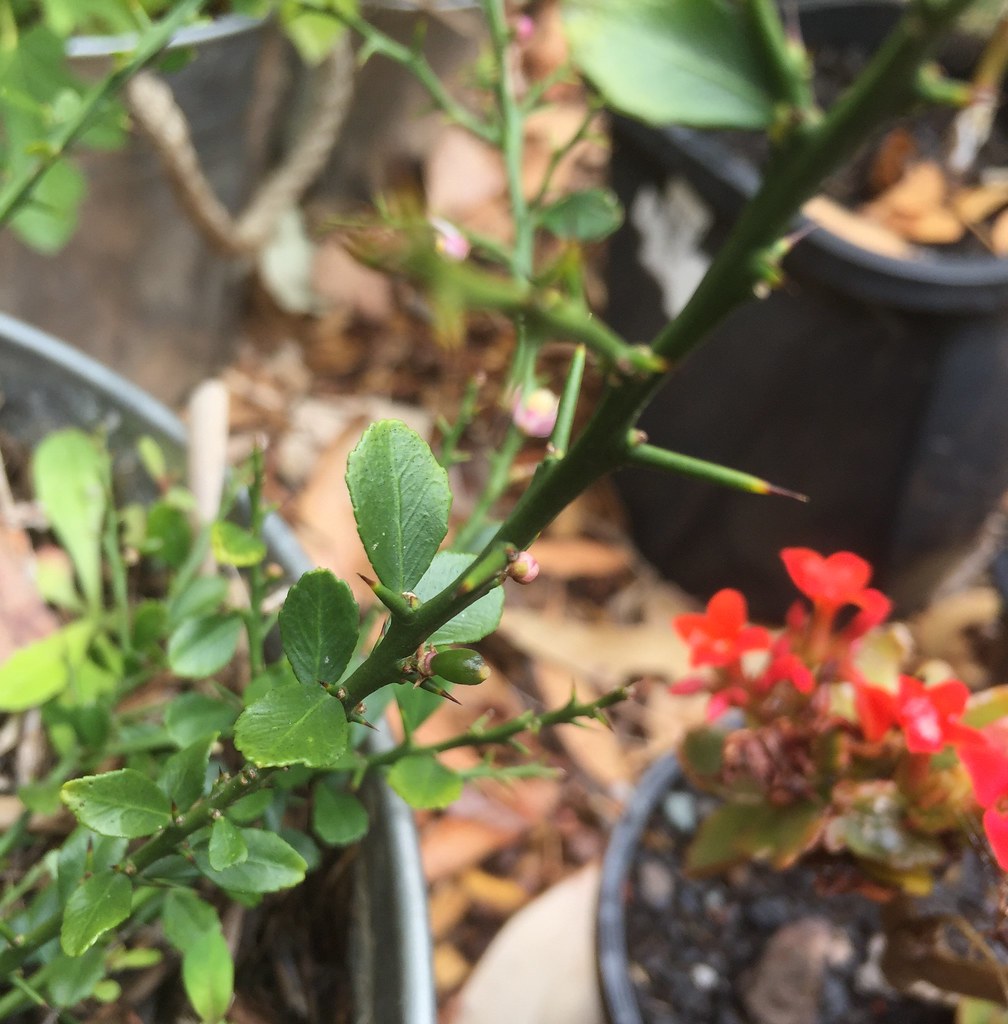 it's thwarted all my expectations though, with a beautiful show of flowers, and a few little weeny fruits too! we'll see if they actually grow into anything edible he he.

the corner where the finger lime is growing, with all my other pots, is looking pretty happy too... 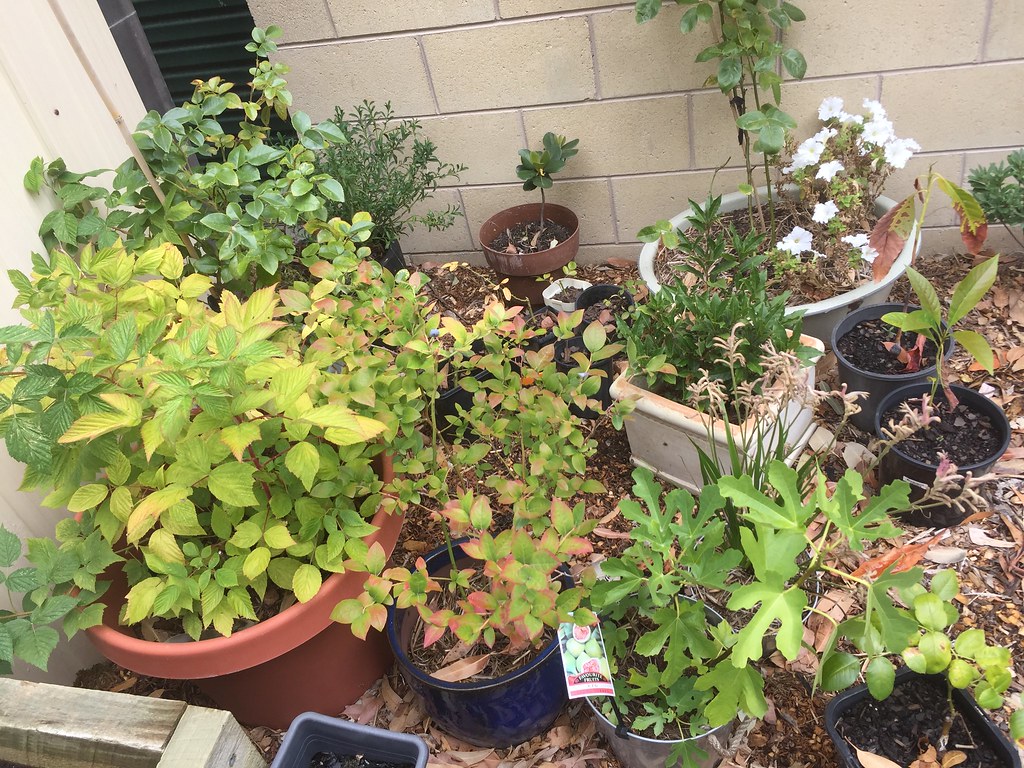 what a collection!
the fig is growing great guns and will need re-potting in no time. and the raspberries? well! i've had a few little nibbles from it. delicious!
there are a few roses amongst the edibles too, and they're occasionally putting on a beautiful show which is always a delight!
and the two avocados i recently moved from the windowsill to out here seem to be enjoying the outside life, phew! must remember to keep an eye on them when it gets a bit cooler though... i've heard they're not fond of frosty times.

just next door to the pot collection above, is this little pocket of greens... 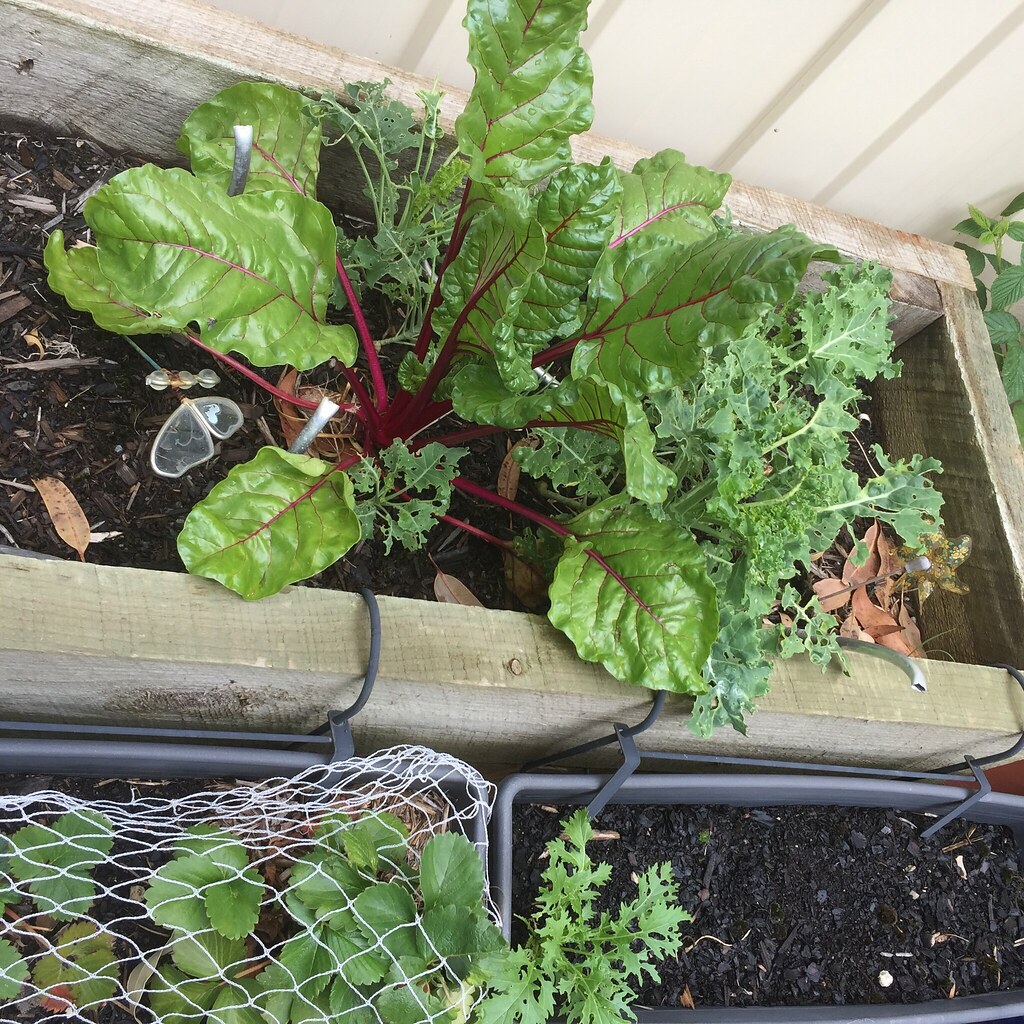 a rainbow spinach plant, a couple of holey kale plants (thanks for that caterpillars) and a rocket plant. here's hoping the caterpillars leave them well enough alone to let us get a few feeds off it ourselves!

we've popped some nets on a couple of the strawberry plants in the hope of getting to eat a few... but for the most part the birds are too clever...

they get a pretty good feed from them too, as the strawberry plants are EVERYWHERE he he. here are a couple more on the herb garden near the cockatoo aviary... 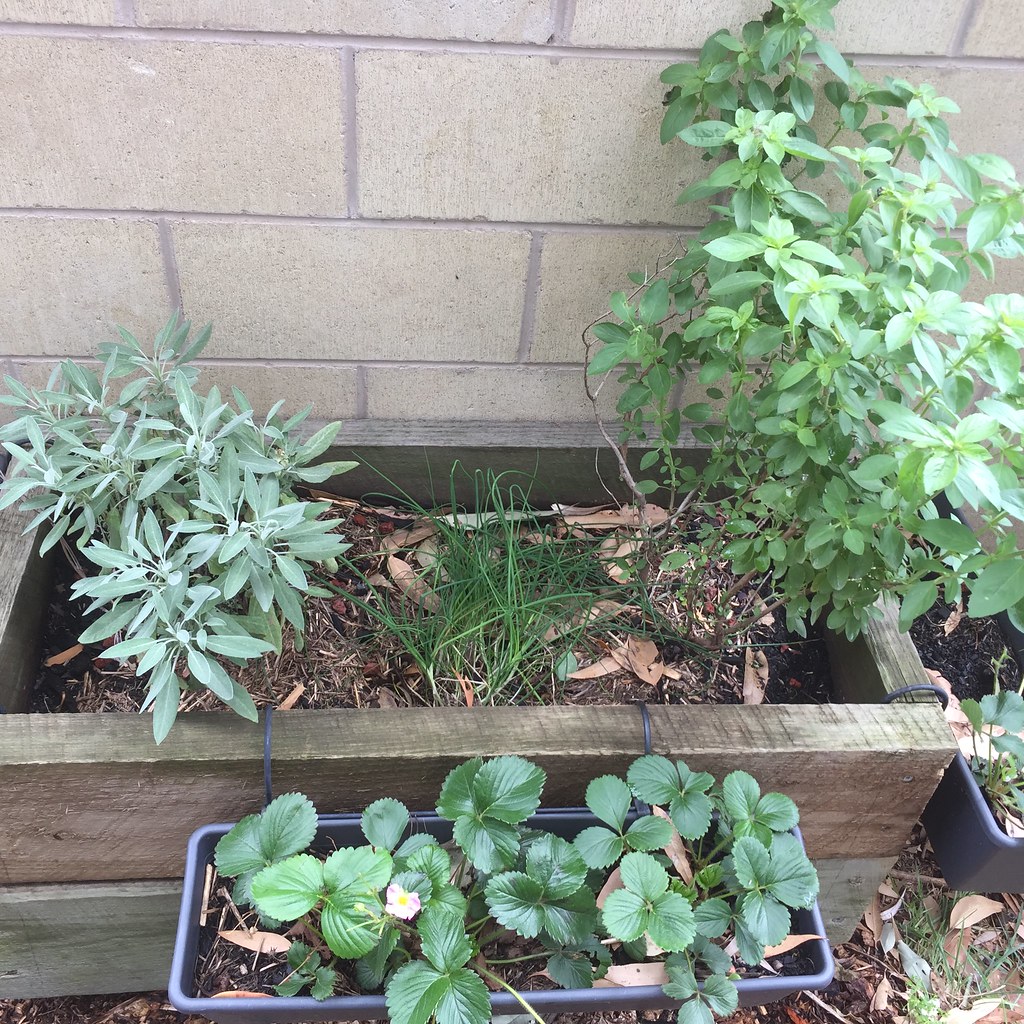 i've got a plan to paint up some little rocks as strawberries to try and dissuade the birds... will let you know how that goes he he.
in the mean time, we have PLENTY of herbs to munch on! check out the sage and basil. both are SO much happier since moving into this planter box when we moved out here, they were originally in little pots when we lived in melbourne. happy herbs!

and to pair with that gorgeous fresh basil, tomatoes! 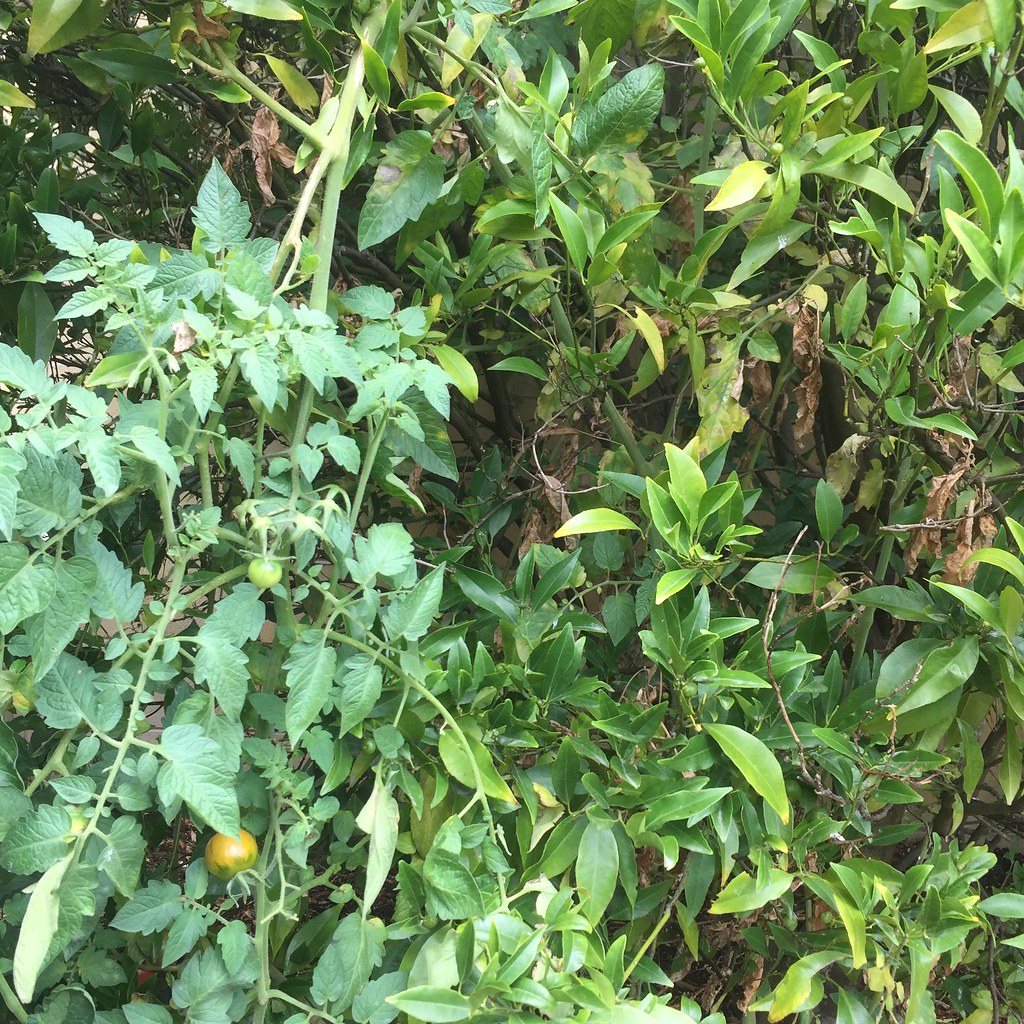 like last season, we missed the boat on planting tomatoes, but not to worry as they came on all by themselves once again he he.
i'm particularly proud of this one, not only did it self seed, but it's sprouted itself right under the mandarin tree, and is using it as a trellis.
the mandarin tree is by far our tallest citrus tree, topping about 3 metres or so i think... and you'd better believe that tomato plant is growing right up and out the top!

there are a couple of other that have popped up in and around the veggie garden too, so here's hoping we get a good little supply from them all.

now i'd best drag myself home, i popped out to a cafe to write this up, but i'd best be off and get to dealing with the mammoth supply of zucchini that we've been collecting from the single plant we're growing. what would we do if there were multiple?!

zucchini slice and brownie and fritters coming up!

what's growing in your patch at the moment? any suggestions for zucchini gluts?
Posted by nicole at 2:47 PM