a day in the garden.

i woke up this morning and the sun was shining in through my bedroom window. after doing gross bill paying type chores, i pulled on my (very dusty) gardening clothes and got out amongst the sun and dirt and lovely green things. 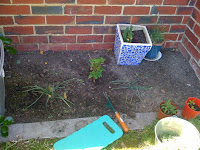 first job: pull all of the weeds out of this little garden bed. i really should've taken before photos as well as after photos as you would not believe what this looked like before... you could barely make out the little grape hyacinth plants either side of the rose amongst all the weeds surrounding them. but tick that off the to-do list now. 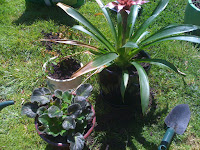 second job: re-pot some sad looking house plants. they'd needed to be done for months! the violet moved with us in june, so it was the most desperate. the gazmania was a birthday gift in august and the maiden fern was a $2 bargain from kmart somewhere in between. hopefully some more room to stretch their roots will perk them up a bit. 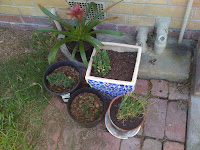 third job: weed out this little brick section. again without a before photo you won't believe the extent of my neglect, but let's just say you would've had a hard time knowing there were bricks under there... i rearranged some of my pots from out the front onto here too, the ones that weren't enjoying the afternoon sun as much as the others... now they'll hopefully be happier getting the milder morning sunshine. see my little gazmania there, happy in it's new pot? it was having quite an awful time on top of my heater, they like it hot but not that hot. 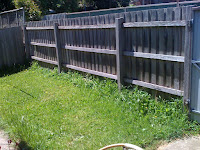 tomorrow: i don't own a whipper-snipper and last time i borrowed one there was way too much frustration with the line and what-not, so tomorrow's job is to trim the edges in the backyard along the fence. i have this feeling it will probably take a while seeing as there is barely half of the backyard... 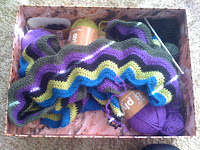 and for those of you who are interested. RIPPLE! i've almost finished an entire colour repeat now. i'm pretty excited about it. i think that it should probably have a name... what do you think?
Posted by nicole at 5:15 PM

Nothing better than a 'green' day in the sunshine...you go girl!

Hey lady, garden looks great! I'm so sick, haven't been doing anything at all.

Garden looks good nicole!! I must say, I rather like your blog :)